Antoine Martin & Morgan Noireaux in a (not so) “serious” interview

German film producer Olaf Crato – he produced Distraction with Marcilio Browne and Blackwaters with Morgan Noireaux, spent a few weeks with his family in Maui and filmed crazy action during the 2017 IWT Aloha Classic. He also interviewed the two wave riders Antoine Martin and Morgan Noireaux. Antoine from Guadeloupe is one of the riders, who takes a lot of risk and can surprise with wild double or triple Push loop attempts or no handed Goiters at Ho’okipa. Morgan Noireaux won the Aloha Classic three times in his young career and won the 2017 IWT tour, too.

But meet now Antoine and Morgan in a (not so) “serious” interview.

Best idea – try to get the weed industry into the windsurfing competition world! Green Sponsorships for a green action sport 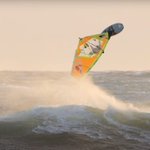 23 years after his first World Title, and still on top. Congratulations to the greatest ever!