German Andre Paskowski – he has recovered from the cancer – and his crew are ready to announce the new name of their current running filmproject. In the beginning they called it “Second Life”. As there are also some outside sponsors involved they ran into some legal problems with the first chosen name “Second Life”.

“Yes shame… but our team has never worked before on such big project so things are new for us as well and we facing a constant learning process. We knew that our new movie is bigger then any of our previous productions and so we didn´t want to risk any problems.” So the crew looked for a new name through their facebook comunity and was successful in the end!

“After spending some days to register the new name proper to not run again into the same sort of problems, we can proudly announce that our new name is: Minds Wide Open“, Andre let the cat out of the bag two days ago.

Manu Bleu sent the winning proposal and got an original North Wave Sail, which helped Victor to win his Wave World Title. Congratulations and thanks to Manu.

Besides changing the name the task still remains the same:

Andre Paskowski about his goals as a filmmaker: “We want to produce a touching Windsurfing Movie. Windsurfing in many cases is more then just a sport. It is a lifestyle. This feeling we want to transfer to each of our viewers. With our World Class Line Up of Riders – I do not worry about best possible action – we want to bring the right feeling into everybody’s living room.” 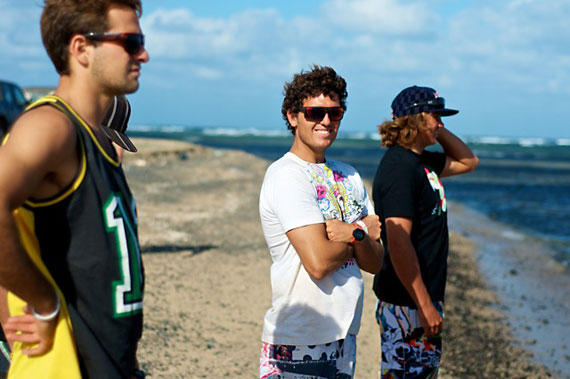 Some of the top riders, who will perform in the new movie (Pic: Michael Sumereder).

The upcoming plans are to film on the Cape Verds, but many other exciting countries are on the story board! Together with his partners Peter Svensson, Sebastian Dörr and the many of the worldbest sailors Kauli Seadi, Philip Köster, Ricardo Campello, Victor Fernandez, Marcilio Browne and Gollito Estredo the next masterpiece should be created in 2011.

can´t believe what i am reading. lucky … is the only one thinking that way and all the rest of the windsurfing world love fd. i believe thats why the new title minds wide open is perfect. most of us have a open mind while very few of us are small minded. … is a perfect example. Obviously making his comment to get some intention which he normally don’t get.

to many haters out there

“a touching windsurfing movie”
Blah blah blah. Cut the gay bullsh*t and concentrate on proper ACTION! 4dimensions was super gay and german (weird thing to say but it fe this way) and I suppose that the new movie will also be crap.

I probably will be bombed with all your responses calling me a hater, so in advance I say that you probably forgot what GOOD wavesailing action looks like: go and watch a GOOD windsurfing movie (like Jason Polakow “About time”: http://www.youtube.com/watch?v=F3iw0wayJiw&feature=related ,Francisco Goya “Alive”, Robby Naish “RIP”, Plug’n’Play or the windsurfing movie)

the movies you listed above were all good in their own right but to call 4 dimensions ‘crap’?? super gay? what’s “german”? i have to laugh out loud at your comment

Hope to see some footage of Kauli on Peruvian waves since it looks like Umi won’t release their movie until 2030.