Amanda Beenen released a short windsurfing clip which she called “my 2014 was pretty awesome”.  So, we asked Amanda, why 2014 was so awesome: “I think in 2014 I got the chance to step it up a bit. I said at the beginning of the year I want to get into the top 5. And it went better than expected. I managed to get 4th overall and won the indoor event in Poland. I put a lot of effort into my training on but also especially off the water and I do think this really helped me get better results. I was really stoked to be competing in the indoor event, this was a dream come true! It was such a well organized event. Just unreal! The whole year went so fast and I had such a great time it’s amazing! I got to meet and hang out with a shit ton of awesome people and I feel like it’s just the start!” 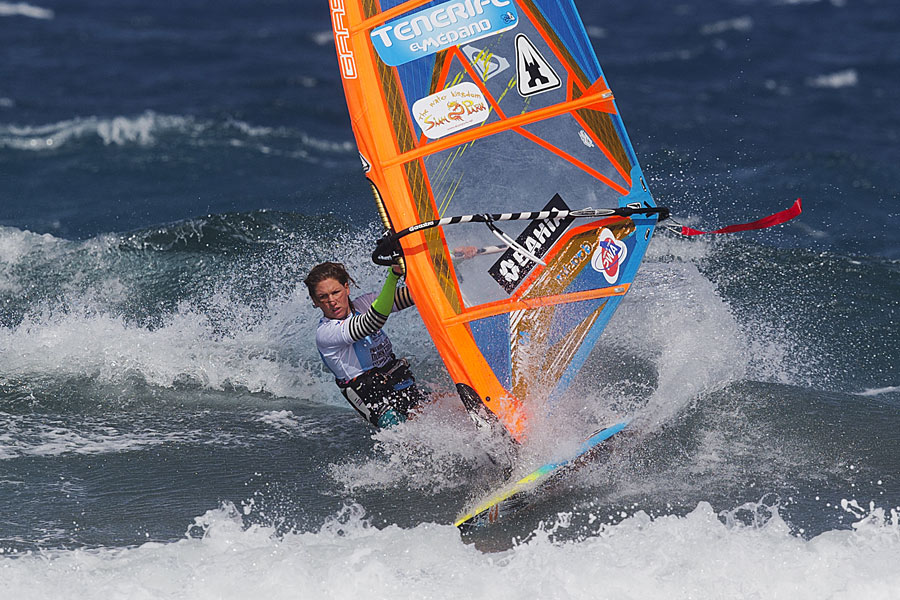 We definitely recognized that she put a lot of effort into her training. Amanda looked fitter and her turns had much more drive compared to previous years. And the good thing, she didn’t lose anything from her daredevil mentality. The 27 year-old windsurfer started really well in the season, shaped her body with cross fit training on Tenerife, windsurfed a lot in South Africa and on the Canaries and finished the event at Pozo Izquierdo in 4th place, where her career had started three years ago and where we filmed her world-famous Double Forward Loop Crash. She really improved her skills within a few years.

At her “home spot” El Cabezo Amanda made it in 4th again and then won the Warsaw indoor jump competition. Not all top ladies were there, but still she took the victory and enjoyed it standing on top of the podium for the very first time. Without wind at Sylt, Amanda had to compete on Maui to battle for a top overall ranking. And she failed and finished the event in 11th.

Amanda, normally there is always a downside to things, too. Any downsides in 2014? “The downside of 2014 was that I got ahead of myself. I am very competitive and by getting on the podium in Tenerife in the single I felt as if that third place overall was in reach! That did put some pressure on me. Losing the over all third title in Maui was a bit of a downer, but only because I tend to forget where I am coming from! There are a lot of things I still need to learn! So yeah, I got all excited, felt invincible, came to Maui, only to discover I actually can’t sail starboard tack haha! BUT that being said I think going to Maui was the best thing what happened too me at this point. It made me see what is the next step into improving. I think that is very important, that you can see what’s the  next step, what is the next thing I need to learn to get where I want to go? If you keep doing this, you will keep progressing.”

Continentseven: What’s your goal for 2015?
Amanda Beenen: For 2015 I am now more driven than ever to get up on the podium! So I will be getting ready for the season as I always do. I will stay in the gym and hit the water as many hours as possible. It looks like there might be some changes coming up on the sponsor side of the story – but this will be revealed when the time is there.

Continentseven: Where are you at the moment and what are your next plans?
Amanda Beenen: As for the upcoming time, I hope to spend some time with friends and family before I leave for my winter training. The holidays are coming up so it’s the perfect time for it! I decided to change my normal winter training in Cape Town for a season in Maui. It will be very different as there might be a bit less wind than in Cape Town but I think, the waves will make up for that big time. I think it will give me some new motivation and push my windsurfing to the next level. I am once again very excited to go and really feel like it’s a new adventure waiting to happen.

This makes me quite restless on this moment. I just feel like I am waiting to take that plane and everything in between is just time to kill. It’s a weird sensation. I didn’t have it for a long time.

I think it is weird that with such a unpredictable life in which nothing is certain and everything changes all the time I still seem to get stuck on doing the things I know how to do and traveling to places I know. But that was kind of happening to me. I have been to Cape Town 5 years now. And for four years I have been doing the same riddle: Holland – Tenerife – PWA season – Holland – Cape Town and start at the front again. It is great but you get used to it. So, time for a little mix up! I am sure I will learn a lot of new things on Maui on a personal and on a windsurf level! After Maui I will go back to Tenerife, from there on everything is open. I made no plans yet but they will come without a doubt!