One can say that Amado Vrieswijk’s 2015 season was quite successful. He finished the PWA overall ranking in third, won the EFPT DAM-X event at Brouwersdam and may call himself European Freestyle Champion soon. In 2015 Amado, who lives on Bonaire, decided for a different way of travelling through Europe. He bought a big camper van and travelled together with Maxime van Gent across Europe. From spot to spot, attending events, following the wind and meeting new people all around Europe. From the Netherlands to France, from Catalunya to Croatia and so on. That’s quite an adventure for a 19 year old youngster. We caught up with him to speak about his season and his travels. 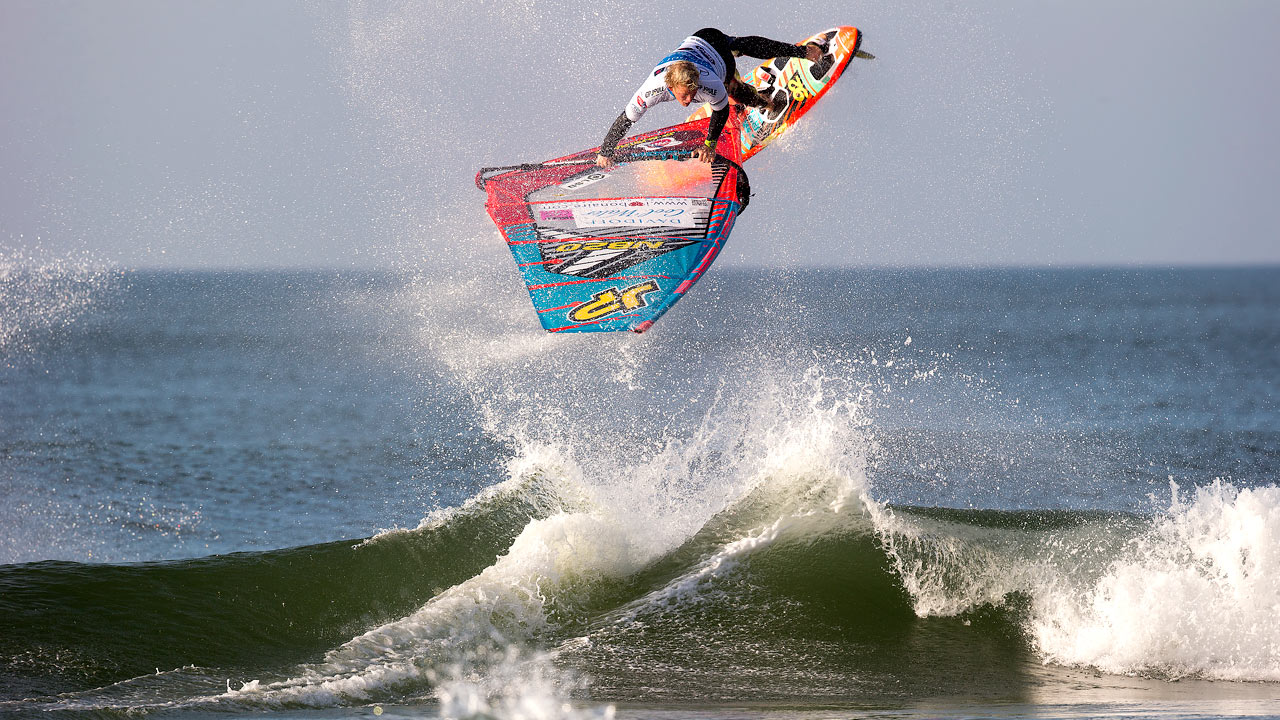 Continentseven: You finished the PWA Freestyle tour in third and you just have won the EFPT DAM-X event at Brouwersdam? Are you happy with your 2015 competition season so far?
Amado Vrieswijk: Yes, I can say that I’m very happy with my results in 2015. My goal was to end in the top 5 again and with hard training, more events in different places and the perfect equipment I could end on the PWA-podium this year. The EFPT- season is closing next week and I’m looking forward to a good battle in Six Four. Hopefully again with a good result after finishing in first place at the DAM-X.

Continentseven: You are leading the EFPT overall ranking at the moment before the final stop in France. How important is this title for you?
Amado Vrieswijk: It would be the cherry on the cake for me after a great year with lot’s of new adventures, events and motivation to train hard again this winter to be ready again for the next season!!

Continentseven: This summer you travelled together with Maxime with a caravan to the competitions. How many kilometers were on the tachometer when you bought the caravan and how many are on there now?
Amado Vrieswijk: The camper had 127300 km on it’s tachometer, and I just checked it, now it’s 142528. That’s 223 times around Bonaire, haha. It was a lot of driving, but great fun. We saw and experienced a lot of new things and met a lot of new friends. 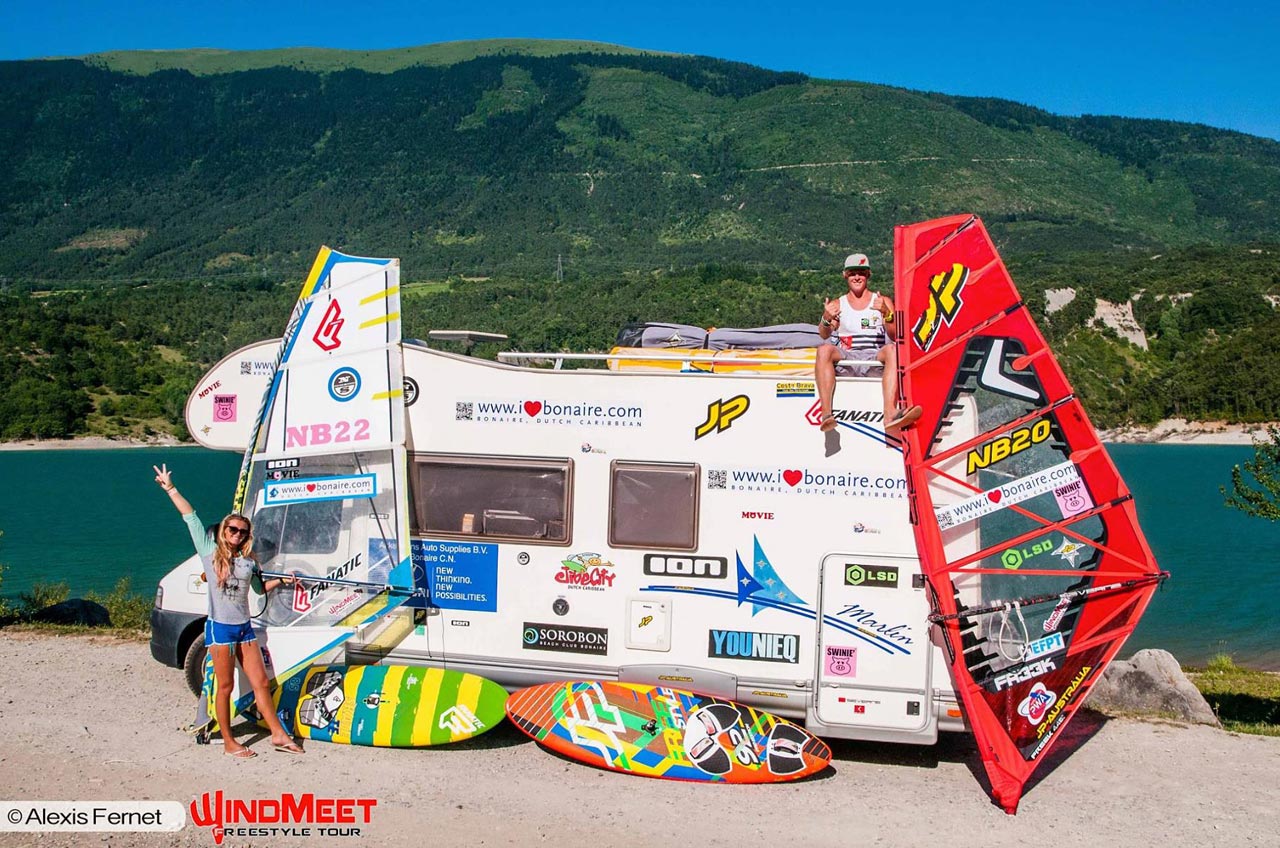 Maxime and Amado and their caravan

Continentseven: You are living on Bonaire and are not really used to driving long distances.
Amado Vrieswijk: I like driving cars, especially fast cars. I had some experience driving with Dieter at the beginning of the season to get used to the long hours on the highway in his bus. Driving the camper was totally new, but it was perfect. It became my home in Europe and will do it all over again next year.

Continentseven: Which country did you like most?
Amado Vrieswijk: I had two favorite spots this year. First, the Canary islands, because of the good winds we had and the many hours I could spend on the water and my second favorite was Croatia, a whole new country for me. The road to Croatia was beautiful, people were very nice and although we had no wind we had a very good time in Orebic and I hope to return there next year.

Continentseven: Any incidents on your travels? We heard something of losing windsurfing bags…..?
Amado Vrieswijk: Yes we lost our board bags on the highway in Germany on our way to Denmark. At that moment it was all looking as we were in a movie and a bit funny, but we were lucky. Nobody behind us at that moment and no broken boards. Lucky us. We were stopped by the police, but could continue soon with the bags inside the camper. 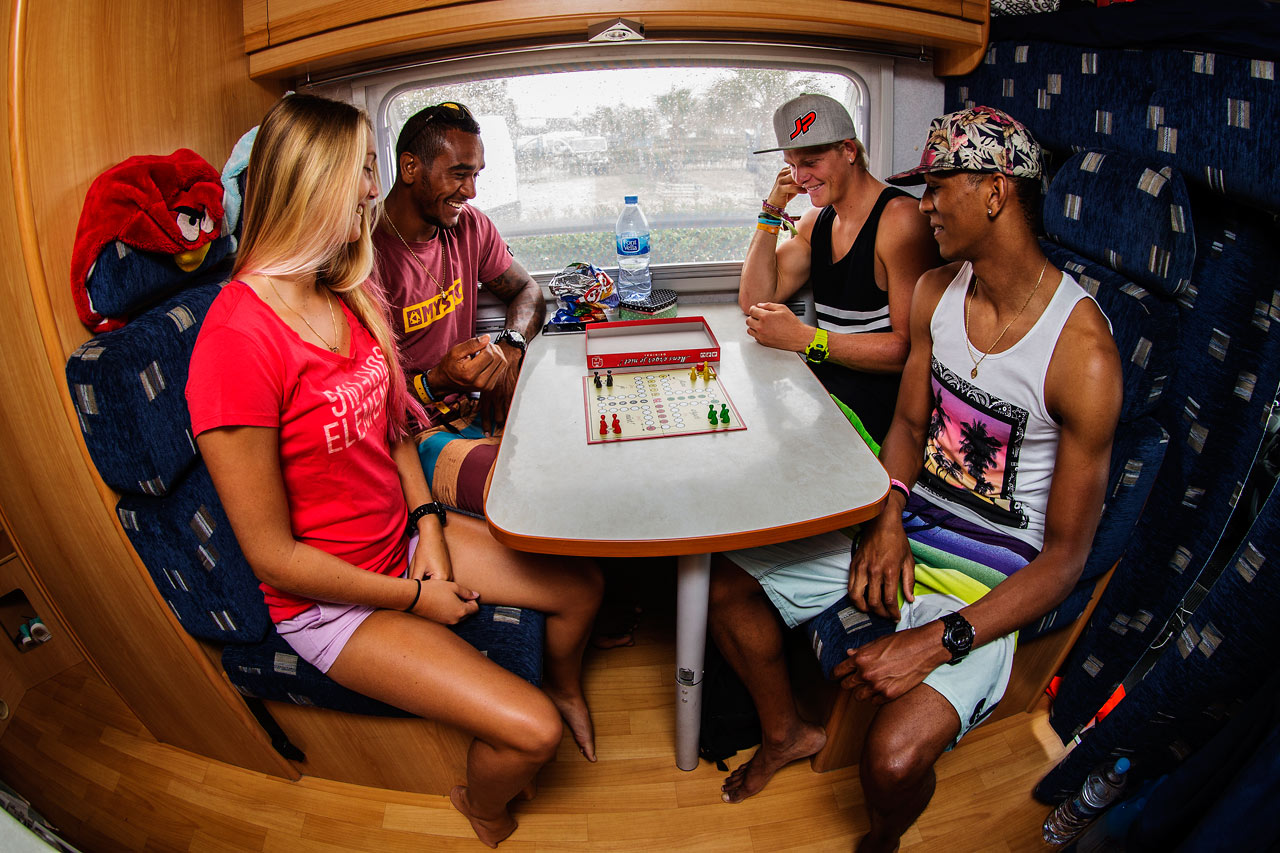 Continentseven: What do you like on traveling with a caravan?
Amado Vrieswijk: It’s very comfortable, you have everything with you. Eat, sleep, windsurf!!

Continentseven: What are your plans for the winter season?
Amado Vrieswijk: After the EFPT EFE Six-Four event in South of France I will travel back to the Netherlands to put the camper in a storage and I will fly to Brazil for 3 weeks. On December 5th I will go back home for a month after being away for half a year and on January 2nd I will meet Dieter van der Eyken in Perth/Australia to train and work on new sails until February 2016. I really look forward to Brazil and Australia. Both countries I will visit for the first time.

Continentseven: Thanks for your answers and good luck for your upcoming travels!