Last month a group of Peruvian windsurfers (Diego Zimmermann -former 3x optimist world champion; Alejandro “Jano” Ruiz de Somocurcio; Carolina Butrich – current Formula Experience women world champion, Talia Lostaunau – photographer and Alexandra Vernal) sailed on a lagoon, which is located at an altitude of 4280m in the Peruvian Andes close to Tanta. Those news made us curious about other altitude sailing records and we were investigating a bit, if someone ever sailed on a higher lagoon. We found out that the Austrian extreme sportsmen Thomas Miklautsch already has sailed on the Laguna Verde in Chile, which is located 4550meters above sea level. He sent us the following statement about it: “It was quite windy for this height, about 45 knots. I was sailing at the foot of the Ojos de Salado, which is the highest volcano worldwide. But I was not the only one windsurfing there, several windsurfers from Chile already did it. I also tried to sail above 5000m in India together with Andy Wolff, but we were not lucky with the wind.”

But read now the story of the 5  Peruvian windsurfing on their lagoons in the Andes. 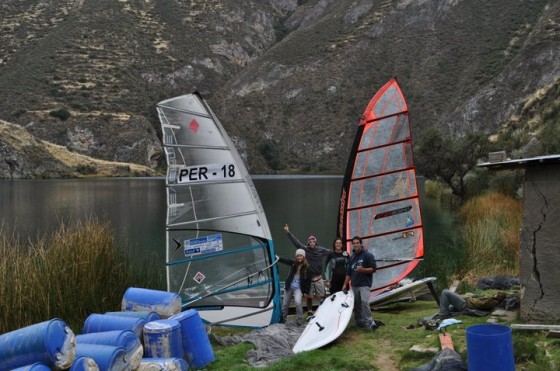 First we sailed on Saturday at a lagoon near Huayhuas at about 3500 meter (11500 feet above sea level), which is just 4km away from the town of Huancaya (which is great for all kinds of extreme sports like kayaking, mountain bike, hiking..). The water and wind were very cold but it was kind of sunny so our regular wetsuits were enough and we had a great time.

On Sunday we drove almost 3 hours through this rough road between mountains and got to Paucarcocha lagoon near the town of Tanta, 4280 masl (14100 fasl). In the pictures you can see the snowy peak of the Apu Pariacaca (apu means mountain in quechua). We took big gear for this trip because it was more like exploration and we didn’t really know what kind of conditions to expect. Our gear: 8.5m Severne Overdrive with Formula Experience 160l board, a Starboard GO and a 6.9 Gaastra. In Paucarcocha, the boom of the 8.5m broke (and yes, one of us did catapult into the freeezing water) so the rest used the 6.9 with the Formula experience board. It was really really cold up there, some of us wore two wetsuits, jacket, scarf and booties and still had their hands frozen. 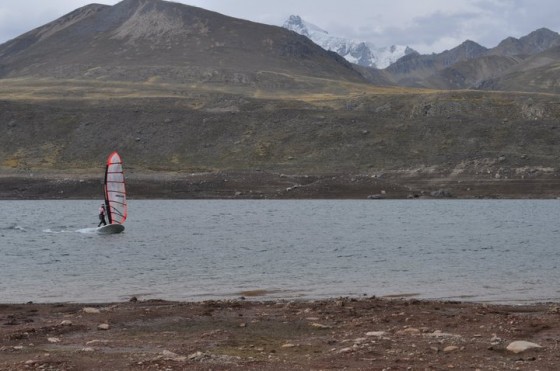 The interesting part of this windsurf sessions is that at such high altitude, the oxygen pressure is so low that you can’t even walk fast without running out of breath, so it was also almost impossible to pump while sailing because you could get dizzy and pass out or get sick. The good thing is that we had good wind in both lagoons and a trusty oxygen tank!

Peru is starting to get known for its amazing beaches with great waves with no people and year-round wind conditions, but this is like the other side of Peru, because there is so much more about this country than just the coast! We can also sail in the highlands and in the jungle (allthough we still haven’t tried that but I’m hoping we do it soon) and it’s cool because if the wind is not quite strong, there is always something adventurous to do around here like climbing or going cascade jumping and rapids kayaking or paragliding.

Soon enough we will try to find more high located lagoons to sail in, getting near 5000 meters! The search has just begun!

tom from the museum

Aloha, here you can find info about the first
(and only maybe) windsurfing crossing of rhe Titicaca lake. Enjoy tom,
windsurfingmuseumprague.eu httpsss://www.instagram.com/p/CIadDOiDzjM/?igshid=11k3kf1ntju33

Does anybody know what the standing altitude record for kite-surfin?

Hi Miguel!
Not sure about that. Maybe you better ask your question on a kitesurfing website, they probably know better!
Cheers!
Kerstin

Attempting to establish Lake Karakul (3960m) in Tajikistan as the highest commercially naviagable lake in the world and then run a full regatta in September 2014, including windsurfing, kite-surfing, sailing and rowing. See http://etc4ca.com/rotwregatta/

The World Record was set on 31st Juy 1988 in BOLIVIA at 17,027′ and was in the 1989 Guiness Book of Records. The lake was just a small glacial melt water named on the may as Cerro Wila Lloje. There was little wind and the edges of the lake had ice around it. My Bolvian wife and Father in Law living in La Paz identified the lake and worked out how to get there. One day jeep from La Paz, one day climbing/walking and one night by the lake.

I didnt know abou that record, thats amazing! We havent been on more altitude windsurfing trips since Huancaya but we are looking for more high lagoons with nice wind to start planing as we did at 4280 meters 🙂 maybe we can check your lagoon with more wind sometime.
Saludos from Lima!

ways to get your ex back

Did you know that in 1988 Rick Franklin from the UK sailed a lake/lagoon in Bolivia near lake Titicaca at a height of 5190m. It was an article in one of the uk mags at the time. I don’t have the mag, but my friend Emma happens to be his sister, so she checked the height with her. ( I don’t think he had hardly any wind though)