A chat with Flo Jung and Graham Ezzy about Mon Coeur

Graham Ezzy won the “Aloha Classic 2014  – Champions for Charity“ super session with his own move, a super smooth one handed Taka. “I was the first person to do the one-handed Taka and maybe I’m still the only person doing them? I was inspired to try the first one almost 10 years ago after watching Josh Angulo do amazing 1-handed off-the-lips at Hookipa back when he rode for Ezzy. I’m happy to finally land a good one in front of the camera and winning the super session is an extra bonus, “ Graham told us. If you haven’t seen Graham’s one handed Taka, you should watch it: Taka one handed by Graham Ezzy

GRAHAM & MON COEUR
Graham announced to donate the $1000 to Mon Coeur, a charity launched by the German windsurfer Florian Jung and friends. Flo: “It is great that Graham won the super session with his one handed Taka. We have been in Cape Town together so he knows the situation and also got to know some of the people that we support. 1000$ is a huge amount of money in South Africa and I am super happy about this donation for the schools.”

We hooked up with Graham and Flo to speak about that highlight in between the competition routine. 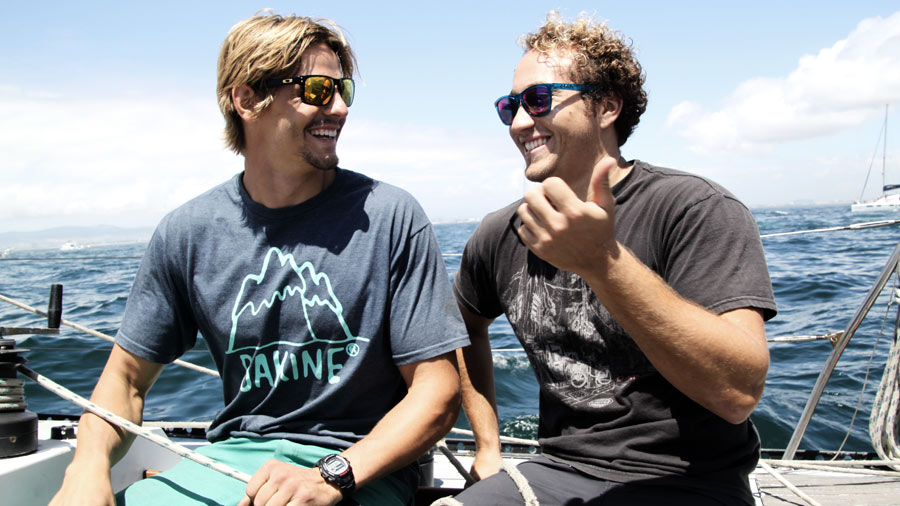 Continentseven: Flo, what is the background of “Mon Coeur”!
Flo Jung: Mon Coeur is a Non Profit Organisation that my girlfriend Marie and I founded 7 years ago. At that time we were in Cape Town and got to know some refugees from Simbabwe that just arrived in there. This family was living under a brigde, they were sick and without working permit or legal papers. They had a new born baby with them and no or little chances to feed themselves. So we tried to create a job for them and finally started producing bracelets called “mon coeur”. Our idea was to create a circle, where they can help themselves. They produced the bracelets in the townships, we sold them in Europe and the money went back to Africa in projects that improves education for children. After some time they could make a living out of it and our projects like the school in South Africa could support more and more children. Over the years “mon coeur” got bigger and bigger and right now we are selling over 1000 bracelets a month and other products. Together with Robby Swift and his wife Heidy, we just designed a special purse that will be available pretty soon with the same idea behind it. We have a lot of people involved in the project and everybody is putting in a bit of time and efforts to keep it going.

The “Mon Coeur” crew with their new friends in Cape Town

Continentseven: Graham, why did you choose Mon Coeur for your donation?
Graham Ezzy: After traveling all around the world, I’ve seen that adults from underdeveloped areas are often stupid because they were not educated as children. Most Americans and Europeans are blind to the benefits bestowed upon them by a basic education, because everyone in their world is educated. But after spending time in places without schools, I’ve seen that without education people don’t know how to think critically. Critical thinking is the foundation for all other skills. I’m convinced that school is the single most valuable piece of the wealthy world. Our educational process not only passes on thousands of years of thinking but also teaches us how to think. We learn how to solve problems and how to interpret information. Kids in the underdeveloped parts of the world that don’t have school, don’t know how to think. That is a serious problem.
We windsurfers get much happiness from Cape Town, and I think it is important to give back. Racism will remain systemic in South Africa until education is universal. Mon Coeur now has the power to build a school in Cape Town for township children. I’m very proud to be part of the project.

Continentseven: The Aloha Classic probably didn’t go exactly how you wanted it to go, but you finished 21st overall with a strong start at the beginning of the season. Are you happy about your performance at the Aloha Classic, season?
Flo Jung: Well, it is never fun to go out early in competition and even though I was happy with the sailing in most of my heats. It just didn’t come together. Sometimes you need these 0,01 points that decide if you advance or not. This season I had two times equal points at the end of the heat and lost because my opponent had a better wave score. But this is competition and you just learn from these experiences in order to improve. A bad result on tour is not the end of the world and results will sooner or later come, if I keep pushing myself.

Continentseven: Graham Ezzy’s donation for Mon Coeur: more valuable than your result?
Flo Jung: It’s hard to compare that with my ranking- these are two different shoes. A competition is just a game, an important one if you call yourself a pro windsurfer. If I win or lose depends most of the time on myself and I am responsible for that. With “mon coeur” we have a lot of income sources, some of the money comes through the sales of our products or simply out of donations of companies and friends. The only thing that matters to me is that we have enough income to pay the monthly costs  to educate the children, feed our workers and keep the project running.

Continentseven: Graham, have you been involved in other charity events or projects in the past?
Graham Ezzy: Giving back feels good, so I’m always involved in some sort of social project. When I was younger, my efforts were more locals– for example, I volunteered at the library on Maui. Only recently have I felt that I have the power to act on a larger scale. Last summer, I volunteered briefly with Access Sport America. They bring windsurfing and other sports to kids who face physical, mental, or environmental disadvantages. Ross Lilley started the program 20 years ago in Boston and it has since spread around the US. The kids get so excited on the water and I loved being a part of that. 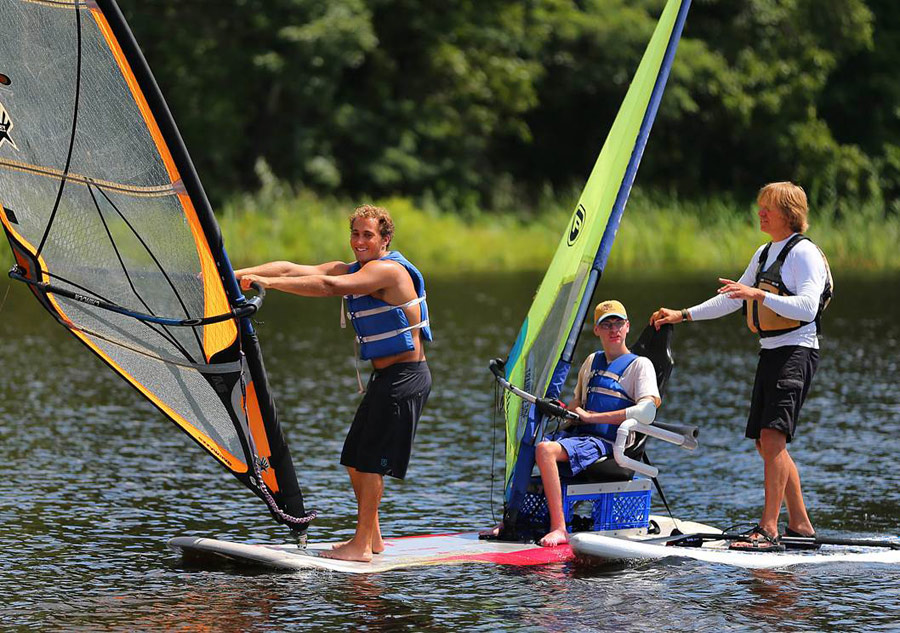 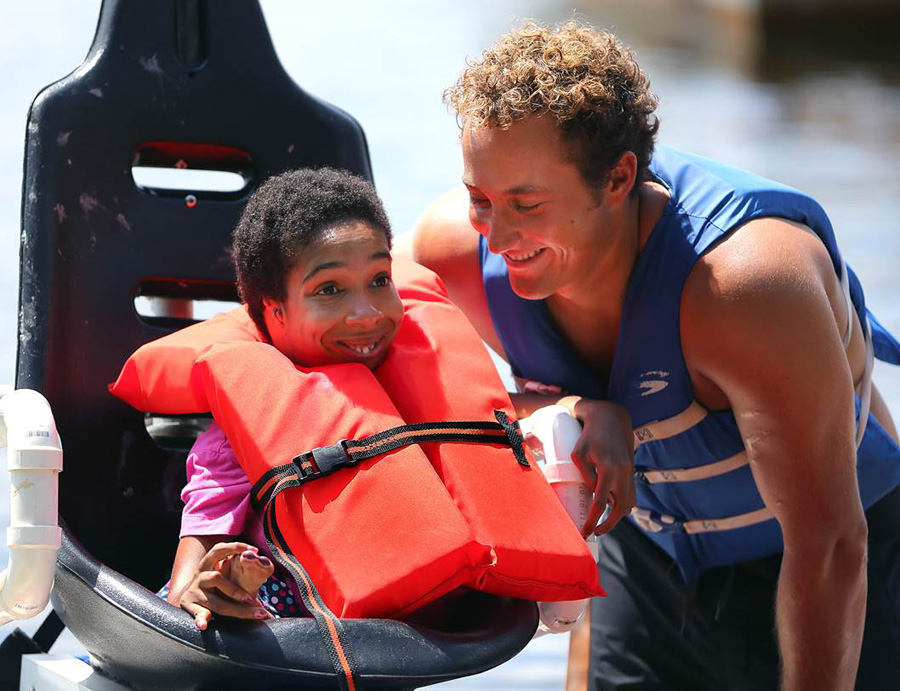 Graham likes to work for volunteer organisations like he did at Boston – Pic: John Tlumack

Continentseven: You travelled to several undeveloped countries during your career, to Madagascar or South Africa? Can windsurfing help the local people to live a better life in the near future?
Graham Ezzy: Education is my main focus. Sure, countries like South Africa and Madagascar face many problems: pollution, water shortages, environmental disregard, etc. But education solves these problems. A smarter community can look after itself without further foreign aid.
Ezzy Sails puts money from every sail into a foundation that buys school supplies (like textbooks) for kids in Sri Lanka (where our factory is). Sri Lanka’s educational system is not bad, but large parts of the population are too poor to buy their kids proper supplies. We make that not a problem.
Every traveling windsurfer can help in an even simpler way. I never forgot Boujmaa speaking about Moroccan kids in the umi video about the 2010 Essouira Wave Classic: Local kidscan’t go places and see what is happening out there. So if we can bring ‘out there’ inside here, it’s a big chance. They can travel…through the windsurfers.” As traveling windsurfers, we can easily show kids who can’t travel what the rest of the world is like. That’s a kind of education that even schools find tough to teach.

Continentseven: Flo, what will you do with the money? Will you invest in more equipment for the Mon Coeur bracelet production in the township Khayelitsha in Cape Town or what are your plans?
Flo Jung: Every penny we receive goes 100% to our social projects, our workers in the townships and material costs. We are a small association and that’s why we are really effective. Apart from our guys in the production, we have no employees that are getting paid, no administration costs or marketing expenses. We simply want to give something back to the ones that haven’t got the same chances than most of us. Moreover we are an association and everybody is welcome to be part of it to contribute something to make a positive change in the world and Graham is a good example of that.

Successful workers make bracelets and young kids get the chance to visit a school.

Big windsurfers mean big personalities! You cant be a big windsurfer if you are not intelligent-like in the global multi million(billion) soccer sh..t.

This is way better than any double or triple front loop. Windsurfing at it’s best !