The Spaniard Alex Mussolini (E-30) made a big decision and decided to leave the Tabou/Gaastra team to return to his earlier sponsor RRD International. We had a chat with Alex, who is in South Africa at the moment to test his new boards and sails. 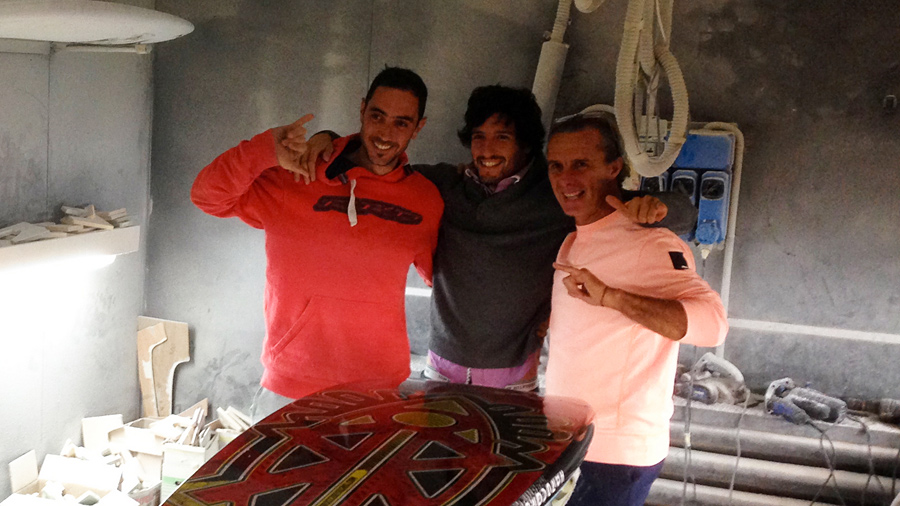 Continentseven: After 6 years with Tabou/ Gaastra you are leaving. How did that come about?
Alex Mussolini: Nothing was planned at all, my feeling inside the brand was perfect, my friendship with Fabien and Thomas was perfect, as we could create the best boards and as we were both similar size body everything was super easy. As the year was getting to an end I received some great offers, but I didn’t want this to happen, but some things didn’t go as planned so I made the move. I honestly think that I made the right choice, to come back to the brand I left in 2008. I got there as a kid and I guess I am back as an adult with more years of experience. I am super motivated to start windsurfing and competing with my new gear.

Continentseven: As you said, you and Thomas Traversa seemed to be the perfect team. Both very sensitive, clean and stylish windsurfers and good friends. Now Thomas won a worldtitle for Gaastra, Tabou. You missed it twice very close in 2012 and 2013. Was that the reason for the change, too? The survival of the fittest in a tight market?
Alex Mussolini: Not at all, for me being with Thomas in the team was perfect. We are super close friends. He is like a brother to me. I was super stoked for him. He really deserved the title. I have travelled with him to many places in the world and I have never seen him lack on something, doesn’t matter if it’s onshore, side shore, off shore, he is always ripping! Being with him in the team was perfect, if he did something I always wanted to do the same. So my level got better every time thanks to having such an amazing sailor in your team. I did not leave because he won, some things you cannot explain, but what is sure is that I did not leave because Thomas became world champion, not at all.

Continentseven: With the question above I did not really mean your personal relation with Thomas, it was more a monetary question. Thomas is now World Champion and gets hopefully a bigger piece of the cake. Maybe it is not enough money left for another top wave rider?
Alex Mussolini: About money, I don’t have anything to do with it. The brands are the ones that decide what to give or not. I am looking at RRD for something that money cannot give. 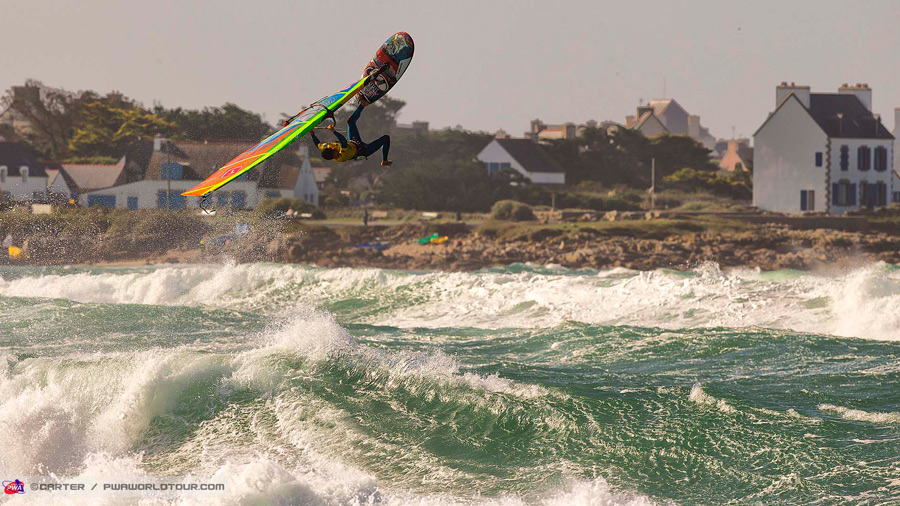 Alex with his signature move at La Torche (Pic: PWA/Carter)

Continentseven: Was it a difficult decision to leave this team?
Alex Mussolini: Probably the hardest together when I left RRD the first time. I am very faithful to my team, I give it all I have to give my team the best results and having to leave was horrible. From the first time I got in touch with RRD until I told Gaastra I was leaving was a nightmare. I didn’t have a good sleep for over 2 weeks. I could not rest until I told Fabien I was leaving and knowing his reply about it, he wished the best for me and my family. He was the only reason I could not sleep, I didn’t want him to be angry at me, but he understood that if I was not comfortable about what is going on, it was better to leave.

Continentseven: RRD has a small wave team with John Skye and Flo Jung, Justin Denel or Andrea Rosati. You will be the clear number one in the team. Do you see this as an advantage?
Alex Mussolini: What I see is that all the riders have a place in the team, they all give a feedback about the gear and help each other on the beach. I don’t think that I will be number 1, I see that I am as important in this brand as the guy that carries the boxes inside the factory in Grosseto. I came to RRD also because we are all a big family and everyone from A to Z is important, I am here to create the best boards and sails, that’s all.

Continentseven: If I read your answer between the lines… it sounds you did not really find your place in the Gaastra/Tabou team?
Alex Mussolini: I did have my place in Gaastra/Tabou team, it is just that, again, I was looking for something that they could not give me at Tabou/Gaastra, and that I believe that I can find at RRD. 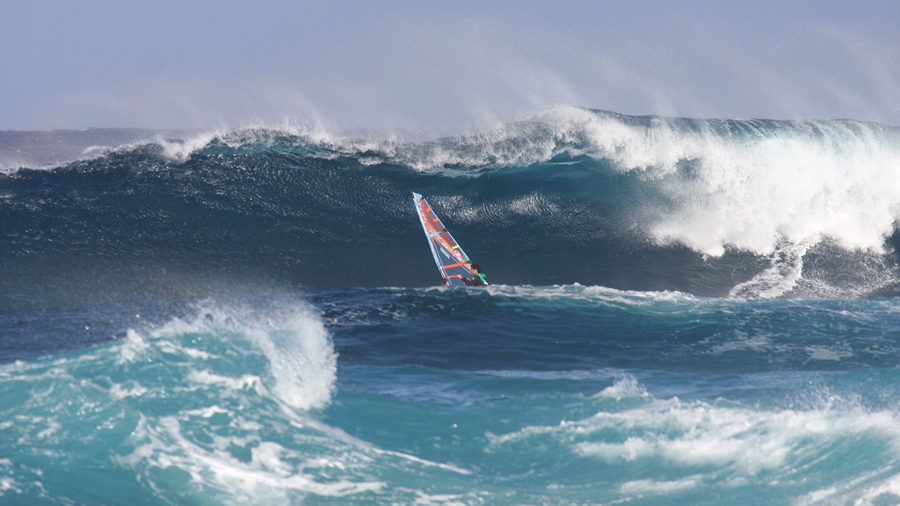 Continentseven: You windsurfed with Fabien Vollenweider’s shapes for 6 years and you are used to these boards. Is it hard now to step on new designs, which might not fit your style from the beginning on?
Alex Mussolini: As I said, I came here to create the best boards in the market, boards that can compete against the strongest teams, I already flew to Grosseto (Italy) and started making some prototypes, which fit my style. The shapes that they create are fantastic, but for sure after 6 years riding one kind of board style I need to make something of my own but with Aurelio’s touch. He is a super talented shaper and he can make what I ask for. Of course all the protos that I test and use now will come in production for 2016.

Continentseven: You won an event in 2009 on Sylt, you made it on the podium several times and almost got the PWA Wave World Champion title.  You have been one of the most consistent wave sailors since 2004, but you didn’t manage to win the title yet. You are still young, only 30 and Björn Dunkerbeck mentioned in an interview that professional wave sailing works till the age of 35 nowadays. Is the World Champion title a big goal for you?
Alex Mussolini: It’s my main goal, but it’s not an obsession. My main goal since I started windsurfing was to always be remembered as one of the best wave sailors of all times. Many windsurfers came on the scene and didn’t manage to win the world championship, but we still remember their names because they were super radical or super talented. 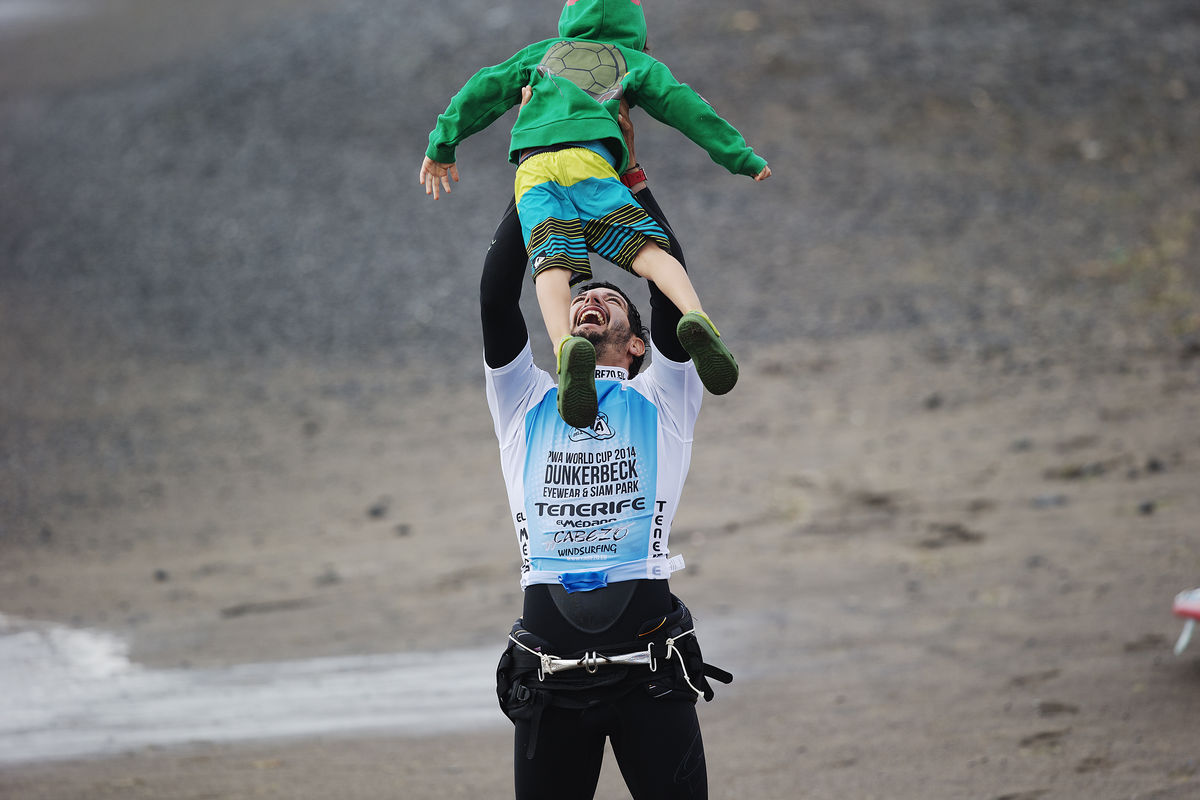 Alex Mussolini in between his heats in Tenerife – Pic: PWA/John Carter

Continentseven: You have a family and are father of two children. How do you manage to combine family life with being a professional windsurfer?
Alex Mussolini: Everything is thanks to my wife for sure, she always manages all the stuff when I am away, her family comes over to Tenerife to take care of the kids when I am away and she is working. When I am at home, the kids go to school so I basically have all morning to windsurf and if my wife is not working I can also get some sailings in the afternoons. When I am away it’s hard, because sometimes I am away for one month. These are the hardest moments, but this is what I chose to do and with a good support from the family, everything is possible.

Continentseven: What is coming next? Are you going to test in South Africa or do you plan to compete in the AWT event on Sal in February?
Alex Mussolini: I am going to South Africa tomorrow to test the sails and new boards. Now is the right moment to do so. I still have time till the first event of the year, and no, I won’t be going to Sal for the AWT event in February.

Continentseven: Thanks and good luck for 2015!

i don’t think is a good decision to be honest…
the sails are not good as the top brands, for sure!!
and i heard from friends that deaing with them is not easy at all!
i think is a money and “team ranking” matter, otherwise i would never change GA/tabou to RRD. never.
btw i love alex and i wish him a successful season

@ Splash. But now Musso is a the big fish in a little pond and will get all the food. What i mean is that musso will get to be the one who decides on what the RRD boards and sails become. He will have the full attention of the team supoorting him. I think this support will be very motivating. maybe we see him as a title contender once again in 2015 like in 2013 and 2012.

I think RRD has made a huge progress over the last 2-3 years, especially with its sails that are now on the same level of quality and performance with the top sail brands. With Mussolini on the team they will only get better!

I am a big fan of Musso and because of his style I switched brands. I regret that he left Tabou/GA. With TT they were epic tandem, one of a kind in windsurfing. The have influenced so many new wave enthusiasts. Going to RRD is a downgrade imho. There are no wave sailors in the RRD team that could provoke him. It will be really hard for Alex-wish him the best of luck! For Tabou/GA things wont be same, as well.