Sarah-Quita Offringa (ARU-91) and Pierre Mortefon (F-14) are the winners of the 9th Pegasus PWA Airlines Slalom World Cup at Alacati in Turkey. It was an exciting final day at Alacati with one full elimination for the women and men. Sarah-Quita Offringa kept her nerves. She needed a top result and by winning the last elimination, she cemented her place at the top of the women’s slalom world. Same for French Pierre Mortefon, who won his first PWA Slalom event in his career. Both riders dominated, but the battle for the remaining podium spots was really close this time. 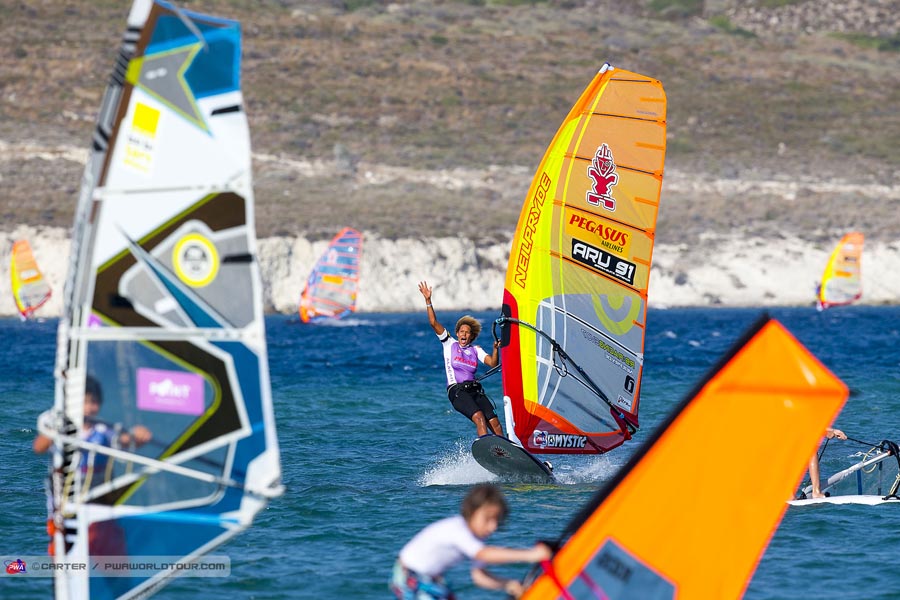 The PWA Airlines Slalom World Cup was the fourth slalom tour stop for the men in 2015 and brought the first discard for the overall ranking. Antoine Albeau is still leading the overall ranking. The Italian Matteo Iachino, who finished Alacati in 3rd stepped up and sits in 2nd overall. With his victory in Alacati Pierre Mortefon climbed to the 3rd place. Ross Williams slipped down from 2 to 4. These four riders have the biggest chances to win the 2015 Slalom World title. The tour will see two more Slaloms for the men, one on the German island Sylt at the end of September and the final on New Caledonia in November 2015.

The ladies had their second tour stop at Alacati and Sarah-Quita Offringa extended her lead in the overall ranking. Lena Erdil, Cagla Kubat, Delphine Cousin and Fulya Ünlü all have exactly the same points at the moment and the final at Noumea will show, who will make it on the overall podium in 2015. 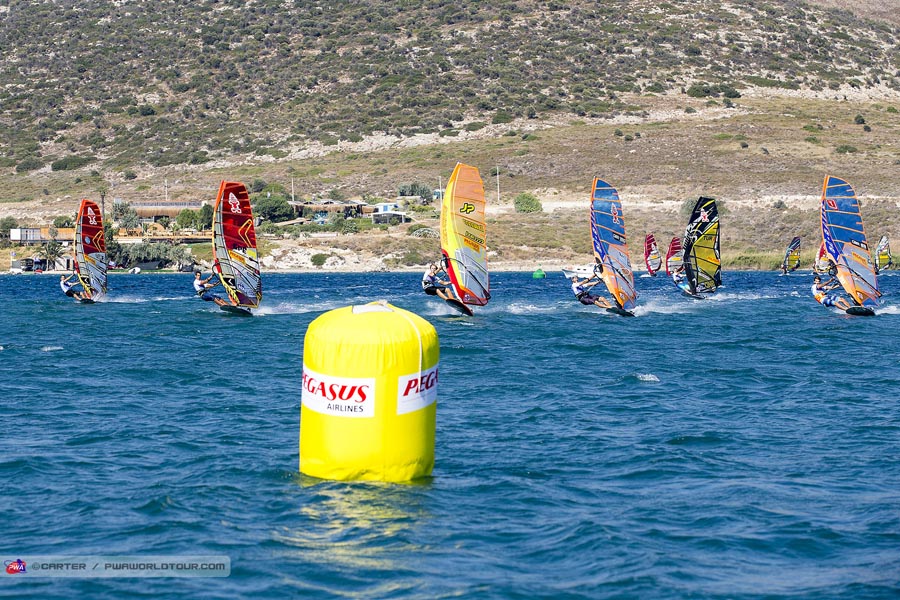 We saw a lot of surprising results in the 64 men counting fleet. A few big name did not qualify as usual for the finals and loser finals. Antoine Albeau, Cedric Bordes, Arnon Dagan, local Jimmy Diaz, Cyril Moussilmani, Micah Buzianis or Ben van der Steen did not manage to qualify through the quarter finals and were out in elimination 1 quite early. Taty Frans, who won his first elimination ever on Fuerteventura, impatiently went over early in his first round heat. Some big names missed out to qualify for the second round, like Julien Quentel, Antoine Questel, Josh Angulo, Pascal Toselli or Kurosh Kiani. All of them hope to get 3 more eliminations done, to discard the high points from the first elimination. The early outs of big names shows how well the local boys go and how strong the young riders are in lighter wind conditions.

Some of the younger boys were definitely on form during day 3. Pierre Mortefon, currently ranked 4th overall and unlucky at Costa Brava with a broken harness line and unlucky at Sotavento with a broken mast, showed great speed. The 26 year-old Frenchman, the 2015 Defi Wind winner, won the first final in front of 25 year-old Italian Malte Reuscher. In third place followed 21 year-old shooting start Tristan Algret – he is 193 cm tall – from Guadeloupe. He participated in a PWA Slalom for the first time in 2011. With Maciek Rutkowski (23) in 4th place there is another young rider pushing towards the top.

After a windless fourth day, day 5, the penultimate day saw the wind from the usual northern direction. Two eliminations for the men were held in 10 to 15 knots and again Pierre Mortefon was the dominating rider in the men’s fleet. He won elimination 2 in front of Antoine Albeau, who made a strong comeback and Tristan Algret, who again confirmed his strong form at Alacati. In the second elimination the local riders weren’t as strong as in the first one. None of them made it in the top 16.

In the third elimination Pierre’s team mate and Costa Brava winner Matteo Iachino showed great speed, jibed at mark one in first and kept the lead. Taty Frans had a great comeback, sneaked in in front of Pierro Mortefon at jibe mark one and finished 2nd in front of Pierre. Elimination 3 again saw big comebacks: Ben van der Steen and Cedric Bordes made their first winners finals same as Gonzalo Costa Hoevel and Jordy Vonk, Malte Reuscher made it into the winners final, again.

Pierre Mortefon was on fire again on the final day at Alacati. He won the 4th and last elimination of the event, too and won his first World Cup Slalom with the lowest possible point score. He managed to hold off Slalom tour leader Antoine Albeau, who got second in that elimination and Malte Reuscher, who secured the second place on the podium with an excellent 3rd place.

Pierre Mortefon won his first PWA World Cup Slalom exactly at the spot, where he was leading once until the final day. This time no other rider was able to take the victory away from the 26 year-old Frenchman, who is in the shape of his life. He was the only rider, who made it in all four winners finals and had by far the lowest discard of 3.0 points only. Very impressive.

Italian Malte Reuscher made his first podium on tour and his fellow countryman Matteo Iachino confirmed his great form with his 3rd place. The young male riders were pushing hard at Alacati. 21 year-old Tristan Algret missed out the podium by just 1.4 points. Steve Allen was the best ranked +40 rider in excellent 5th and Antoine Albeau finished in 7th. Ross Williams in 6th and Ben van der Steen in 8th showed great speed. By the way Ben van der Steen won the top speed ranking of the event with a GPS speed of 69 km/h. Casper Bouman, former RS:X racer, made his best PWA Slalom event finish ever with a 9th place and local Bora Kozanoglu again surprised everyone with an excellent 10th place. Bora is as well the best placed Turkish male windsurfer. Some riders didn’t perform as usual and were far back in the rankings at Alacati. For example: 24th Arnon Dagan, 39th Micah Buzianis, 40th Ludovic Jossin, 43rd Josh Angulo 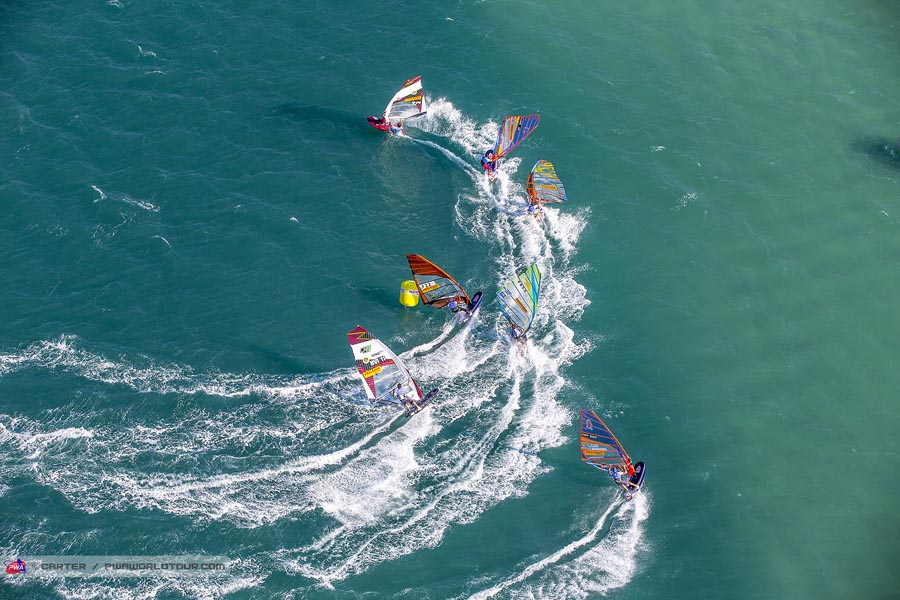 Pierre Mortefon in the lead 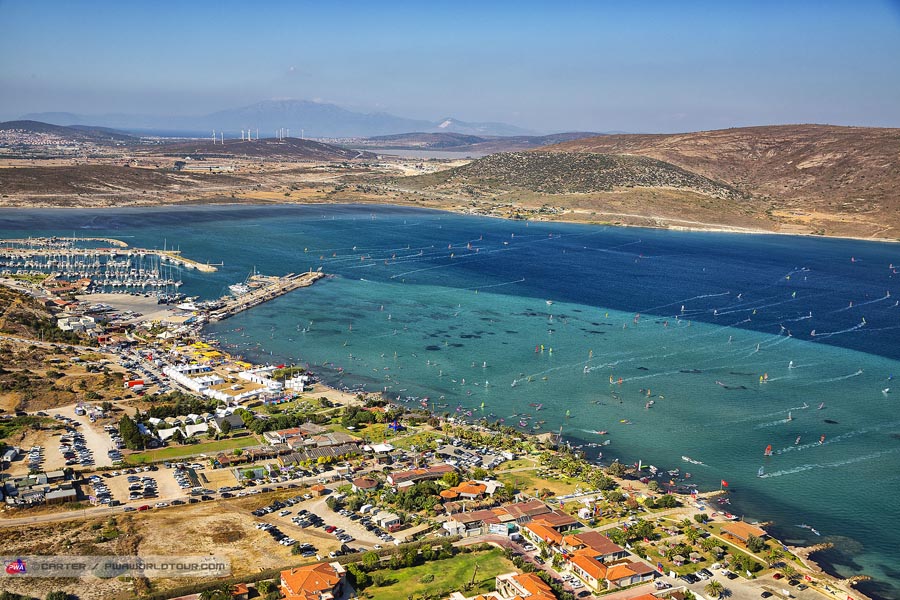 31 girls from 13 different countries registered for the second Slalom event of the season. 19 year-old local Fulya Ünlü was on form at her home spot and won the first Slalom elimination. She made her first podium at Jinha, South Korea in 2015 and has trained during the past months at Alacati and participated in the national Turkish Slalom tour. French Marion Mortefon (23) surprised with great speed and made it in 2nd. Cagla Kubat,ex Miss Turkey, is fully back after her baby break and is currently ranked 3rd. The top favourite Lena Erdil from Bodrum made it in 5th place in the first elimination. Sarah-Quita Offringa, current Slalom World Cup tour leader, had problems with the timing of her starts and didn’t make it to the winners final.

Sarah-Quita Offringa had an incredible comeback on day 5 and won both eliminations and is back in the game for a podium place. Marion Mortefon sailed extremely consistent in both eliminations finishing in 3rd and 2nd and has a clear event lead with 7.0 points. So far it’s the best World Cup Slalom for Marion, who got 8th at the first event in South Korea. Turkish Lena Erdil was consistent and sits in 2nd overall. Delphine Cousin and Fulya Ünlü both missed out to qualify for the winners final once and lost some ground. There are just 2.4 points in between the second placed Lena Erdil and 5th placed Sarah-Quita Offringa. The final day will be really exciting. The first discard can bring a big change in the rankings. Still a few ladies have the chance to win the event or finish on the podium. 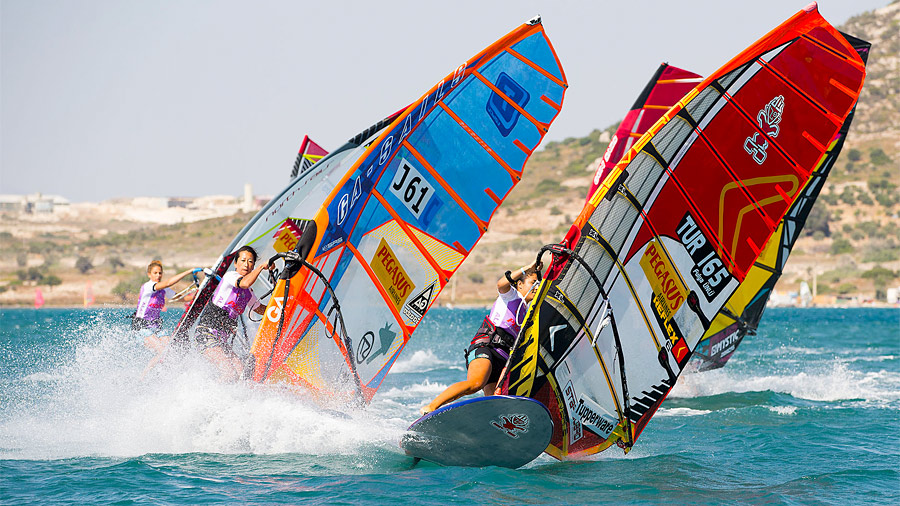 Sarah-Quita Offringa kept her nerves and completed a stunning comeback by winning the last elimination as well. After winning the event at Alacati 2012, 2013 and 2014, she was able to hold off her female slalom colleagues. Her strongest contender was French Marion Mortefon this time, who was leading the event until the last day. In the end she made her first PWA podium and finished 2nd. Local Cagla Kubat saved the remaining third spot on the podium with a 4th place in the last elimination. 2014 Slalom wold champion Delphine Cousin did not make it on the podium as well as the Turkish riders Fulya Ünlü and Lena Erdil. But it was quite close.