The event should take place from 11th to 13th December at the Icarai­ Beach, located at Amontada, Ceara state, 200 km east of the Capital Fortaleza.

But things changed suddenly. The IFCA stated on their website: Due to unforseen circumstances the South American Freestyle Championships has been postponed. More details about the rescheduling will be posted as soon as they become available.

Adrian Beholz, one of the young talented German freestylers, sent us his view on the things straight from Brazil. He styas there for training and actually wanted to take part in the competiiton.

The news spread like a wildifire. „No pricemoney“ or „the governement gives no money” were the sentences I heard the last days. In the sense of being still dizzy from the poisen of a stingray, which stung me two days ago, I only notice the news in trance.
But one is sure: No pricemoney, no competition. The South American Freestyle Campionships are cancelled. The riders are unsatisfied because they extra came for the event.

The plan was to run a big event from the 11th  till the 13th of December at Icarai, where Club Ventos has a second windsurfing station. Journalists from all over the world came here and they went in a buggy convoi from Jericoacoara to Icaraizinho. On their way they recognized many kids on the side of the road.

But what´s a about the competition? Instead of a competition with prizemoney, the status changed into a charity competition, which will be counted as teh Brazilian Championships. The competitors will not win money, but they will win balls for soccer or volleyball, which Club Ventos and the magazines will sponsor. After the competition the balls will be given to exactly those kids on the side of the road, who live in poor conditions close to the beach to give them the chance to play. 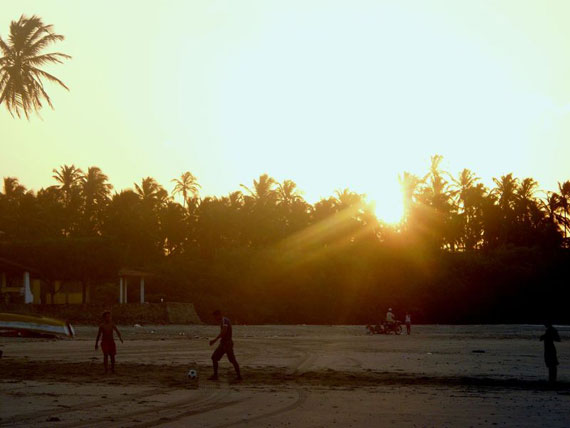