A chat with Timo Mullen about the video Cape Cold

Timo Mullen: “This wave looks perfect, but what you can not see is that this wave is probably one of the most dangerous waves in Ireland. The rip current is lethal, if you break anything which is very likely, the current is so strong you can not get back to the shore.”

We wanted to know more about the video, the wave, Ireland’s west coast, Timo’s broken hand and why they do not use a jet ski for safety. Read more in our interview below and don’t miss to watch the video: Cape Cold ft. Timo and Finn Mullen 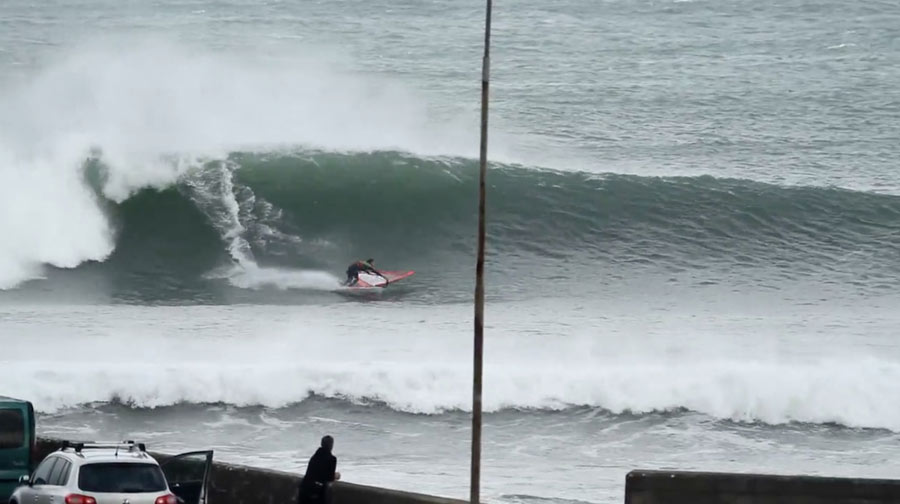 Interview with Timo Mullen about wave windsurfing in Ireland

Continentseven: When did you catch this monster swell?
Timo Mullen: This was at the end of the winter season, early March, so it was pretty cold, around 6 degrees air temp, water temperature was not much better! I actually just got the Stena Line ferry from my home in England specifically to catch this swell, I was in and out in a day!
Continentseven: With whom did you share this session?
Timo Mullen: My brother Finn, Katie McAnena and a local big wave surfer Paul O’Kane, Finn is always on every swell that hits in Ireland, he really is the guru, but I am claiming the call on this day!! My dad and younger brother Tam came along later on to video the session which I’m so grateful to them for as its a tough job in 6 degrees!!, JC managed to sneak in the back of my van to capture some insane images for Windsurf Magazine, if you want to check out that story go grab yourself this months issue of the magazine which is in the shops now! 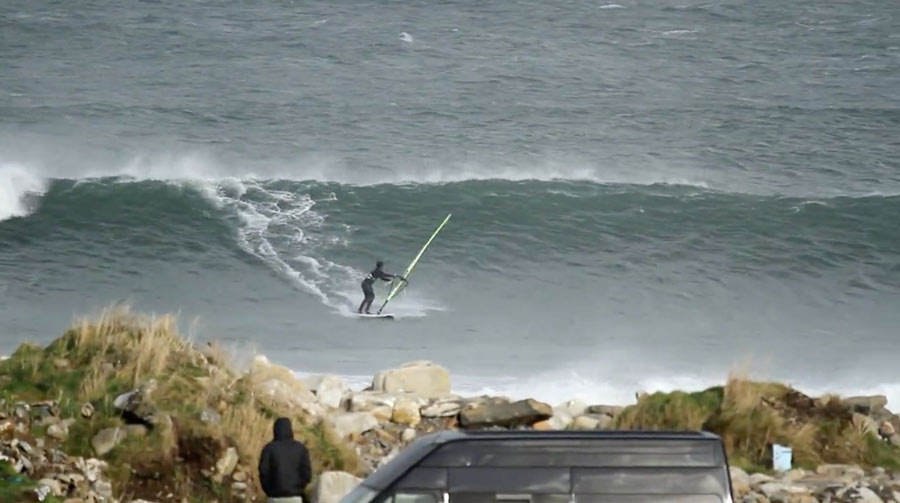 Continentseven: It was at Ireland’s west coast? Your favorite area for wavesailing?
Timo Mullen: Yeah I’d say this spot is one of my favourite spots, but it only works if we are lucky twice a year, you need about a million combinations of wind, tide, swell, moon, sun, temperature etc etc for it to be good!
Continentseven: Your best session ever?
Timo Mullen: Yeah for sure, I’d say it was the most epic perfect left-handers I’ve ever sailed in, it was hard to really cut loose as the wave is just so fast but it was so rad the feeling of just locking in and feeling the power and speed of such a perfect wave.  The wind was super light and gusty when I first went out so i was on my Severne 4.7m Blade and Starboard 92 Quad, in hindsight I should have gone on my 82 Quad as I probably needed a narrower board to cope with the extra speed!  The best bit was watching Finn just picking of some absolute bombs, I love Finns style, I could watch his bottom turns all day!  I hope Josh Angulo doesn’t read this as he was seconds from booking a flight from Boston to catch this swell, we’ll get him over on the next one when it happens as his 5hr flight from Boston to Dublin actually places him closer to the break than me!!  Josh would shred this place to bits as it is basically a port tack Punta Preta thus the name Cape Cold!
Continentseven: The wave looks extremely clean, huge and scary at the same moment? Did you feel any fear when riding it?
Timo Mullen: This wave looks perfect, but what you cannot see is that this wave is probably one of the most dangerous waves in Ireland.  The rip current is lethal, if you break anything which is very likely, the current is so strong you cannot get back to the shore. On a smaller day which is on this video (in my blue wetsuit) I wiped out on a 360 on the end section, I broke my mast and literally spent the next hour trying to get back in, in the end i had to rest at a buoy by tying the rope from the buoy to my harness, the current was so strong I was planing on my back against the current!!!  The other thing you don’t see is that it breaks right in front of rocks, a bit like Punta Preta, so if you go down your session is over.  I painting a pretty scary picture of the place but every session I have had here we have had to spend an hour rescuing somebody, next land is 25 miles away if the current takes you!!  Myself and my brother both have a worst case scenario plan for this spot and every time we have had to use it!!
Continentseven: Did you bring a Jet Ski for safety?
Timo Mullen: I wish, that would be the best answer to overcome the dangerous current, but wave sailing in Ireland is pretty raw and to be honest relying on a Jet ski for safety is a false sense of security, Jet Ski’s are not exactly reliable, our basic rule in any wave sailing situation has always been if you can not swim in by yourself then don’t go out!  Both myself and my brother always carry spare rope, you can see on the video an orange rope hanging from my harness, thats a whistle, not to play a tune, but darkness falls pretty quick in the winter and sound is going to be the only way someone can find you! We did have one surfer sharing the waves with us that day, Paul O’Kane who is the main water safety guy here in Ireland, so we were under a watchful eye!! 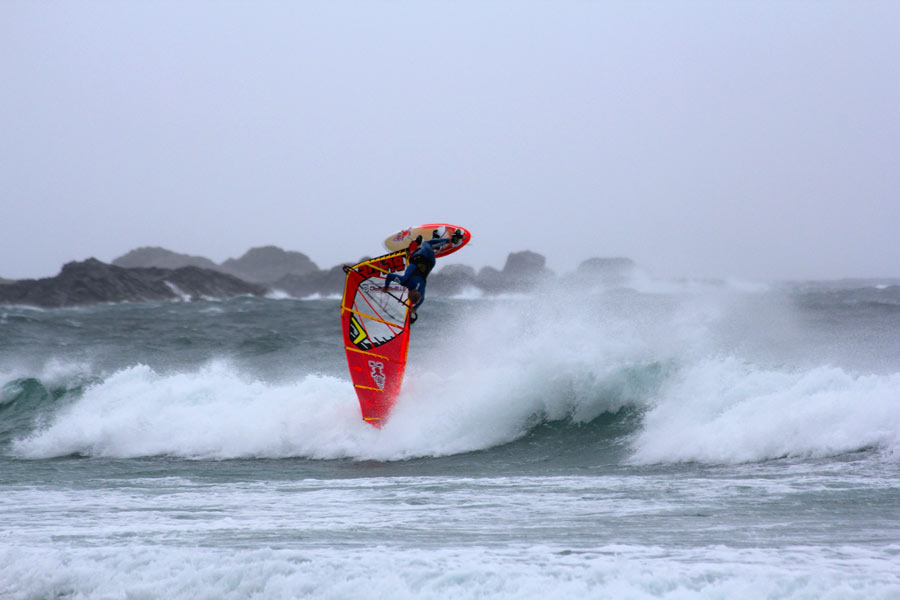 Continentseven: Any broken gear? And what gear were you using?
Timo Mullen: No, we were playing it pretty safe as we wanted to make the most of the day, when you get this spot this good the last thing you want to do is bust all your gear on your first wave as the reasons I’ve outlined above mean your session is over!
I was using my Starboard 92 Quad and 82 Quad and my 4.7 Severne Blade, Finn was on his Starboard 82 Kode set up as a twin fin and a 4.5 Severne S1.
Continentseven: How did you and your brother feel after such a great day?
Timo Mullen: Pure happiness, we were literally laughing and smiling so hard after every wave, it was a shame it was so deep into winter which meant we only had 5-6 hours of usable light.
Continentseven: How many waves did you ride that day?
Timo Mullen: Quite a few, we sailed from 11am-3pm, the launch is such a pain in the ass that once you launch you don’t come back in. If there had of been a red carpet back to the beach I would have taken it to grab my smaller board but that would take up 45 mins of perfect waves! I’d say I caught 50 waves this day, more than I’d catch at Ho’okipa in 3 weeks!!
Continentseven: You know Western Ireland like your pocket? Are there still unridden waves and will you keep on searching?
Timo Mullen: 100%, if you are adventurous enough to come and wave sail Ireland in the Winter and you want to sail outside of the usual well known spots then for sure you will score an unridden spot.  Grab an up to date surf guide, use your common sense and  the world is your oyster.  Just remember to be courteous to the locals, the surfers and don’t drop in!  I live in England now so my froth to sail back home in Ireland is greater than ever, I’d say I don’t miss many sessions there, Stena Line have made that easier by operating plenty of overnight ferries to Ireland from England that put you in position to be at most of the West coast beaches by 9am the next day.
Continentseven: You are injured at the moment. What happened?
Timo Mullen: Yeah I broke my 2nd Metacarpel shaft on my left hand in end of August when I was in Tiree, I smashed into some part of my gear doing a Goiter.  I work all summer to have free time in our best months of September, Ocotober and November so it was a real bummer to have this injury right before the start of the season . Six weeks after breaking my hand there has been no wind so not so bad, but now the Atlantic has gone crazy! 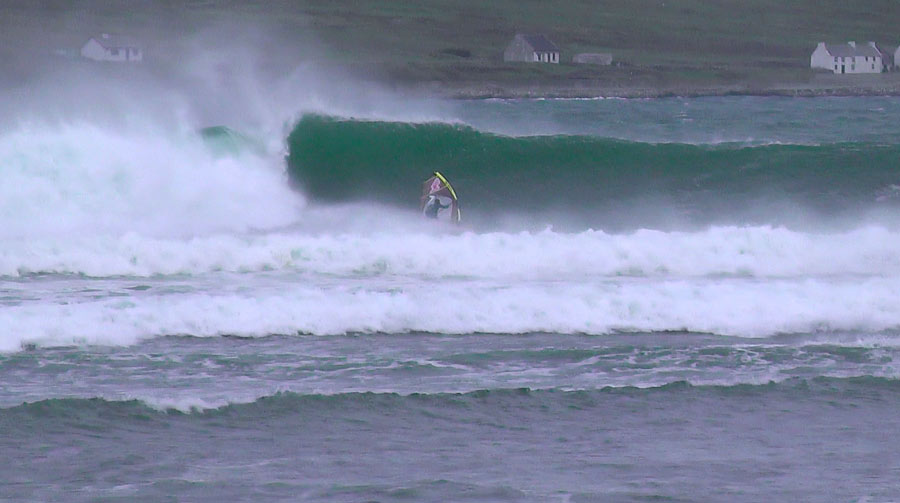 Timo windsurfing with a broken hand

Continentseven: When will you be back on the water?
Timo Mullen: My surgeon said another 6 weeks!! But I couldn’t stop myself from heading to Isle of Lewis in Scotland with my buddies Jamie Hancock and James Cox last week, as it’s my back hand wave riding on port tack there is not too much pressure so I could sail at about 70% of what i can normally, although now i’ve seen the CT scan of my hand I can see it is still very much broken so I’d better take it easy, saying that I just had to jump on a flight to Ireland on Thursday to catch that last monster swell!!  I was supposed to fly to Gnaraloo next week for 10 days but I might have to leave that this year but looking at the current state of the Atlantic maybe I’m better staying at home!
©Continentseven 2014

Hi fan, no problem it is always good to discuss safety 🙂 and thank you again for your feedback. @Sjoerd, I am a huge fan of buoyancy aids (lifejackets technically refer to a inflation type device) – for windsurfing in big waves we use them a lot and will frequently double or triple up – using one or two slimline flotation vests then a further greater more buoyant flotation vest on top – you tier up the sizes to do this so start with a large then xl etc – some people argue that this does not allow you to… Read more »

Awesome clip and riding, no doubt about that, but… Reading that “darkness falls pretty quick in the winter and sound is going to be the only way…” I wonder: if you risk your life doing something you love, why don’t you use the latest technology to be rescued?! How about using a chip that is detectable by the coast guard (like skiers off piste) and a waterproof mobile telephone? Do you REALLY think that anyone can hear your whistle out there? Have you ever tried to locate one another in 0 knots wind at night, say, somewhere warm and nice… Read more »

Hi – many thanks for your comments and concern – a whistle is an invaluable tool in SAR and its value should not be underestimated in casualty location. Electronic safety devices whilst valuable also suffer from the inherent relaibility issues that water ingress and damage from use in a dynamic environment produce, I would never rely on them and I say this from over 20 years of marine SAR service and experience including night time winter ops. What Timo omitted was we also carry strobe lights and spare lines for towing and rafting. Further on this day, on shore we… Read more »

From an amateur perspective, its really good to read through some thorough thought and reasoning on wave safety! Especially when it comes directly from experience in both windsurfing and water rescue.
I have a question: What is your opinion about life jackets? (Not only in big wave off-shore circumstances with lots of power but also in more Eurowave side-on stuff?)
Thanks for sharing your thoughts

Thank you for these additions. They make a very big difference to how I think about the risk you were taking! From reading the interview one was led into thinking that a whistle and a rope was all on offer. I would like to apologise for my initial hefty reaction to what I called irresponsible. I can see that you carefully planed and executed this mission. I wish you many more big days!