The PWA returns to Cabo Verde for the 5th time (for the first time in 12 years) and runs the 2022 SOMWR 10x Cabo Verde PWA World Cup together with Josh Angulo and a few partners on the island of Sal from February 20 – 28, 2022.

What happened until now?

On day 2, after a 60min final heat it was Bernd Roediger who won the single elimination in front of Marcilio Browne, Thomas Traversa and Antoine Martin.

On day 6 the first three heats (heat 16-18) of the double elimination got completed in decent waves and (almost) side shore wind. And after a day without waves yesterday, the conditions finally improved today, on day 8, and the double elimination got resumed. With there still being a long time between sets the sailors were given 45 minute heats to show what they are capable of, but even with long heats it was only possible to compete 4 more heats (some got cancelled) before the waves dropped back again. Heat 19-Heat 22 saw valid results.

The Double Elimination on day 8

Heat 19 had already been cancelled two times before today, but on the third time of asking it was eventually completed, which saw 5-time PWA Wave World Champion – Philip Köster – crash out of the event in the first round, as Arthur Arutkin and Julian Salmonn advanced.

Philip Köster reflects: “I feel alright. For me there was a lot more luck involved than proper sailing to be honest. If you didn’t get the right during the 45 minutes, then you’d miss out. You can’t win anything unless lady luck is on your side in those conditions – there weren’t many sets, so I didn’t have much chance. I’ll now just go and sail somewhere, reset and try and enjoy my time on the island.”

As previously mentioned, Takara Ishii had looked dangerous in the opening round of the Single Elimination, but just missed out on a place in the next round. However, the young Japanese ripper built upon an accomplished showing in round one of the double to win Heat 20 ahead of Camille Juban, who also sailed a solid heat. Takara managed to get 7 points for his best wave ride. Baptiste Cloarec, who was so impressive in his opening heat, looked a little out of sorts as he exited the contest with fellow Frenchman Antony Ruenes.

In what would turn out to be the penultimate heat of the day – Marino Gil and Graham Ezzy – booked their places in the third round of the Double elimination at the expense of Josep Pons and Liam Dunkerbeck.

Marino Gil: “I’m super happy to be competing here, I think I got some of the best aerials of my life here, so I’m super stoked with it. Advancing makes it even better, so I’m happy.”

Meanwhile, Victor Fernandez, continued his come back through the double and the 3-time world champion looked in excellent form as he posted the only excellent wave score of the day – 8 points – to win Heat 22 ahead of Robby Swift, who sailed a very solid heat.

Heat 23 with Arutkin, Campello, Denel and Salmonn was run twice, but it never came to a successful end. Let’s hope for proper conditions on the final day wherever the heats will be run. There are discussions going on to move the competition further north to Little Ho’okipa. 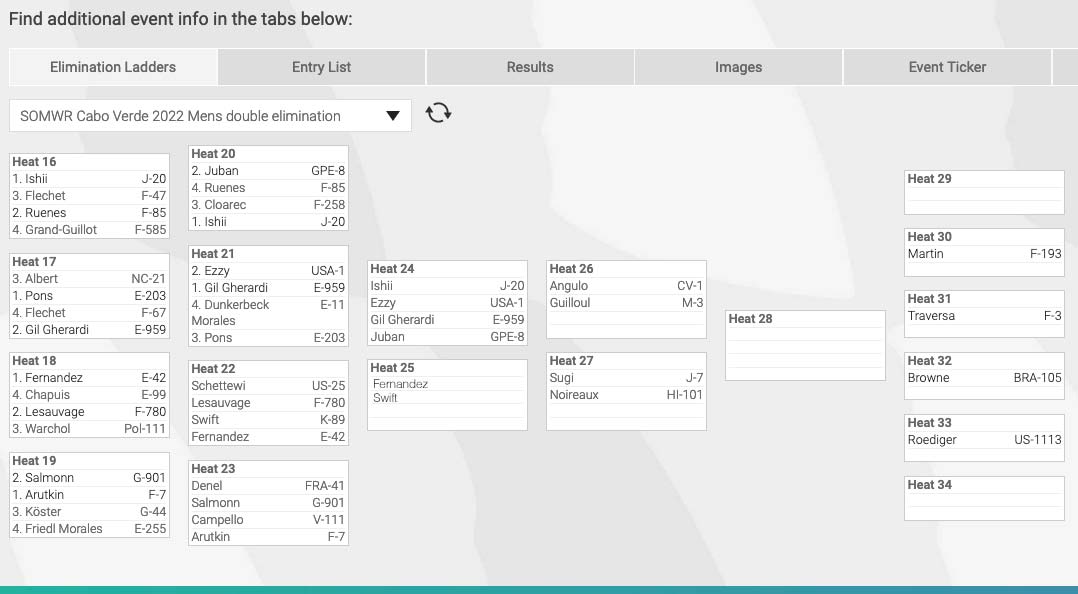