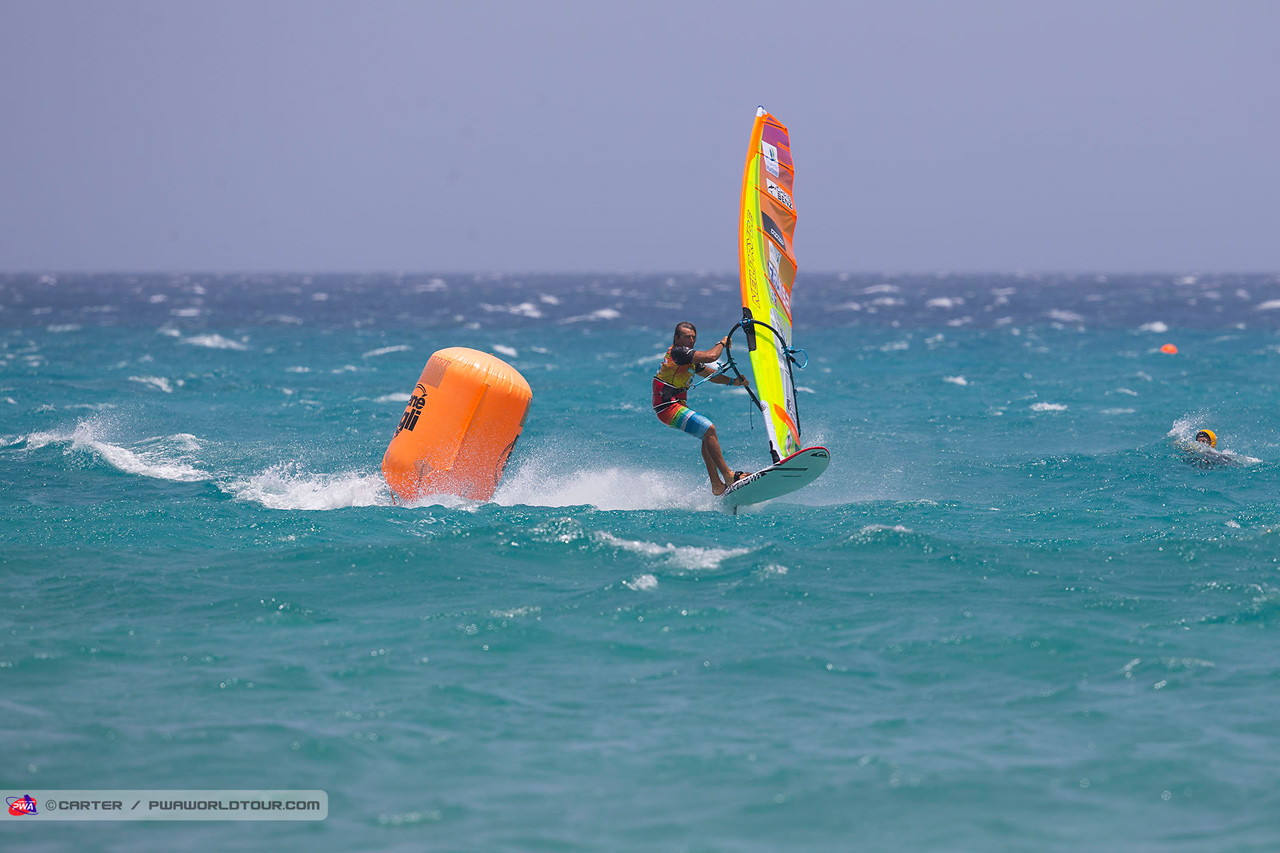 5 days of freestyle and 5 days of slalom are over at the 2016 Fuerteventura PWA Grand Slam. Sarah-Quita Offringa and Amado Vrieswijk won the freestyle competition. Antoine Albeau claimed victory in the 2016 slalom World Cup after 9 eliminations, ahead of Ross Williams and Pierre Mortefon. 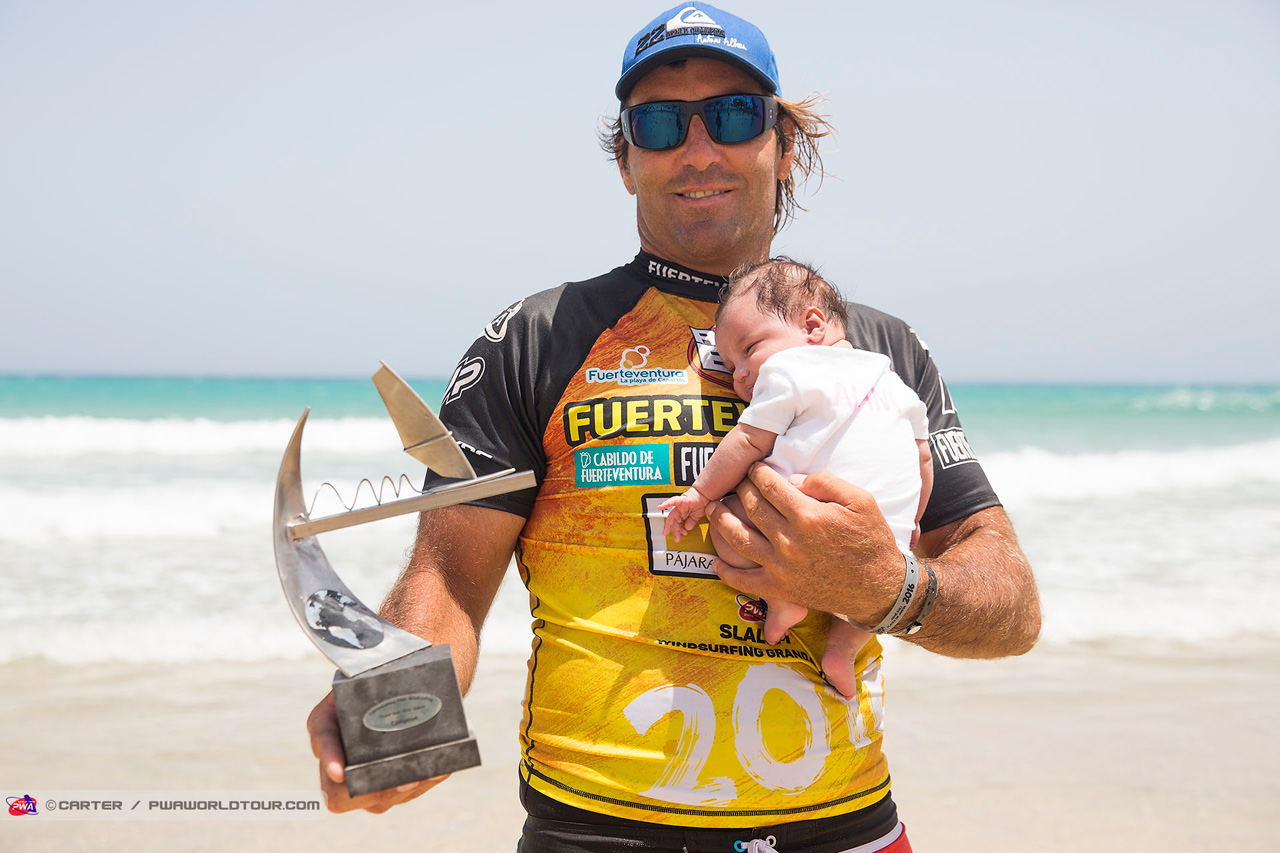 Antoine Albeau with his son and the trophy (Pic: Carter/PWA) 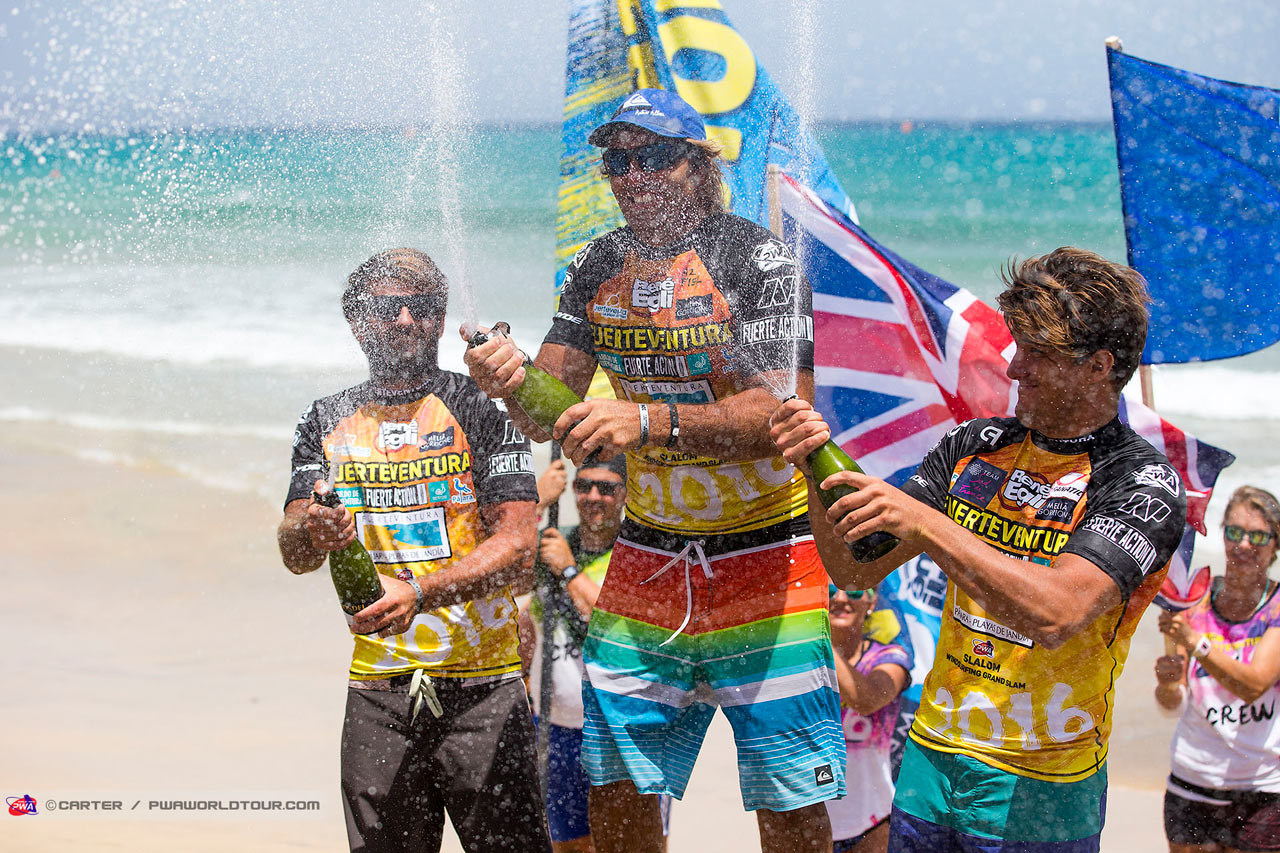 The final day at the Slalom World Cup in Fuerteventura saw a new course. The PWA race crew decided to have a port tack start and a course with 5 jibe marks. The sailors had runs with an average time of 3.30 min to 3.50 min. The conditions were incredibly demanding with wind above 40 knots and a hard chop. Ben van der Steen took the hammer down and won the winners final. Event leader Antoine Albeau made it in 2nd and Matteo Iachino in third. Antoine Albeau secured his event victory. Congratulations!! In the overall ranking (after three events counting) Pierre Mortefon leads the rankings. Matteo Iachino is in 2nd and Ross Williams in 3rd. We will see 3 or 4 more events during the next events.

Day 9 saw a lot of clouds and the wind wasn’t consistent enough to start any eliminations during the morning hours. At the quarter past one elimination 8 got started and it took the race crew and the riders almost 5 hours to complete this elimination. 23 premature starts caused some more starts on day 9In the end Matteo Iachino won his second elimination in this competition. Taty Frans made a second and Julien Quentel a third place. Event leader Antoine Albeau had an over early in the third round, but still leads the ranking. Bad news from Pascal Toselli. He dislocated his shoulder today. We wish a quick recovery!! Tomorrow will be the final day at Sotavento. The wind forecast looks promising for tomorrow and we will see an exciting final with at least two more eliminations.

Day 8 | 29.7.2016
A slow start to day 8. In the morning the wind was up and down from 8-20 knots. At around 1.00 pm elimination 6 got started. In the end it was again Antoine Albeau winning elimination 6. Ross Williams won the 7th elimination in a monster finish against Pascal Toselli. Watch it live or watch the radical races or finals here.

Day 6 | 27.7.2016
2 slalom eliminations got finished. The first elimination was won by Matteo Iachino and the second one by Antoine Albeau. Antoine is the event leader after day 1.

Day 4 | 25.7.2016
After a gusty and windless morning the competition got started at 14:45. 2nd women single elimination got finished. It was again Sarah-Quita Offringa, who won in front of Maaike Huvermann and Oda Johanne.

Day 3 | 24.7.2016
13:41 Sarah-Quita Offringa won the ladies final against Maaike Huverman, who won five heats in a row before the final. Maaike sailed on a really good level in her sixth heat of the day but had to accept the incredible level of Miss Quita, who again managed to collect a lot of points from the beginning of her heat.
14:16 Amado Vrieswijk defeated the Belgian Yentel Caers in the super final. The conditions were challenging with lighter wind and less wind compared to the previous days
16:00 start of a second single for the ladies
16:34 start of a second single for the men, but just the first round will be done today

Day 1 | 22.7.2016
Registration and first skippers meeting is done. Competition started at 14:30. By the end of the first day over half the men’s single elimination and the opening round of the women’s single got completed. Check out our short crash edit from day 1: Crash Compilation Day 1