10 Facts about the 2015 NoveNove Aloha Classic

A look back on the 2015 NoveNove Aloha Classic. The conditions, especially during the first days were epic. The biggest waves in almost a decade during a PWA/AWT event hit the Hawaiian shores of Ho’okipa to produce a perfect stage to the event. We tried to recap the event with some facts. 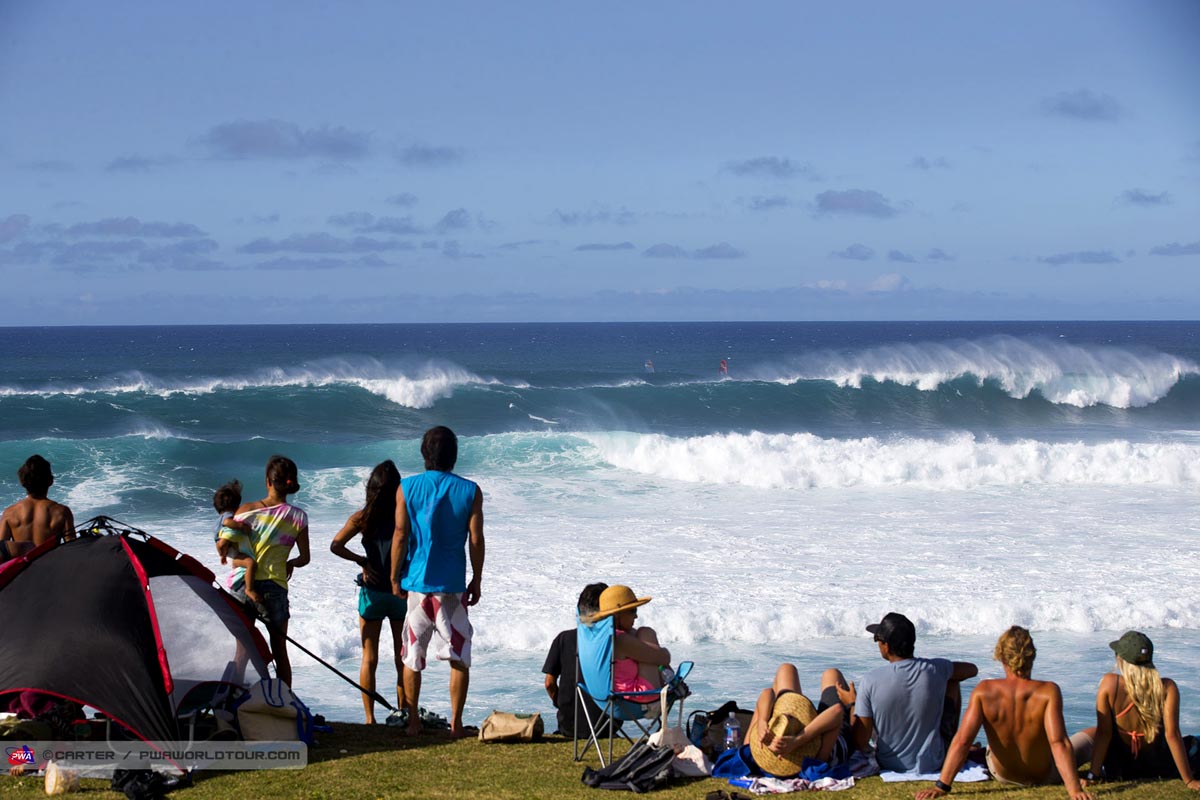 1. THE LOCALS RULE
Ho’okipa is a reef break, which needs a lot of local knowledge about wind, rocks, waves or swell direction. Especially in the men’s category the boys with the best local knowledge and down the line skills ruled the spot. In the end it was Morgan Noireaux, who showed the highest consistency throughout all his heats and won the Aloha Classic for the second year in a row. He is Mr. consistent at Ho’okipa. Kauli Seadi returned to competition with incredible drive and style and finished in second and Levi Siver was much stronger and more focused than last year and finished in third. In the ladies category the situation was slightly different. Pozo local Iballa Ruano Moreno, who loves to ride and surf waves in Starboard tack conditions won the event, but young local rider Fiona Wylde gave her a hard time and showed amazing wave rides. Fiona definitely rode the bigger waves and Iballa rode more top to bottom. 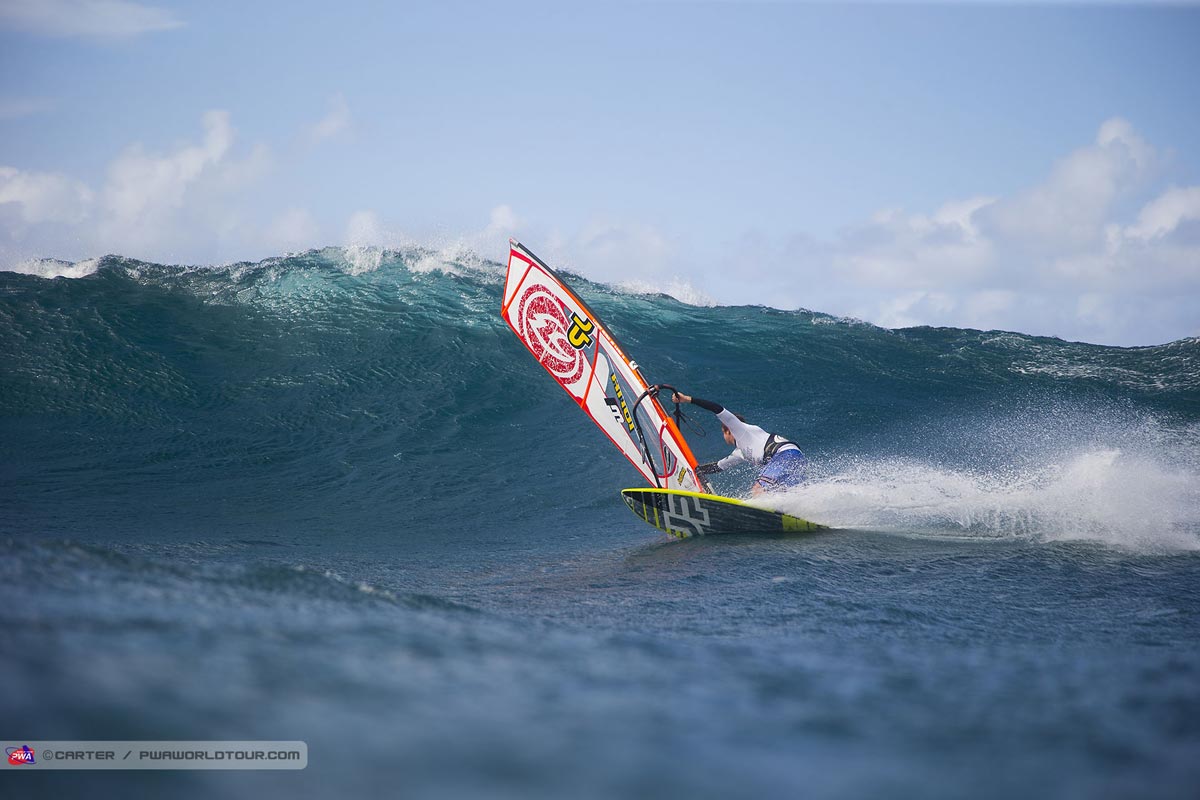 2. RIDERS ON THE ROCKS
As the waves were massive, we saw some gnarly wipe outs. We saw John Skye for example getting hammered twice in his heat by a big wave. John: “Probably the most scary experience of my PWA career. Sailing out into double mast high white water. Luckily came out unscathed and made it through.” Kauli Seadi, Sarah-Quita Offringa, Iballa Moreno, etc. were on the famous Ho’okipa rocks. Unfortunately Tiffany Ward got injured crawling over the rocks after a wipe out. 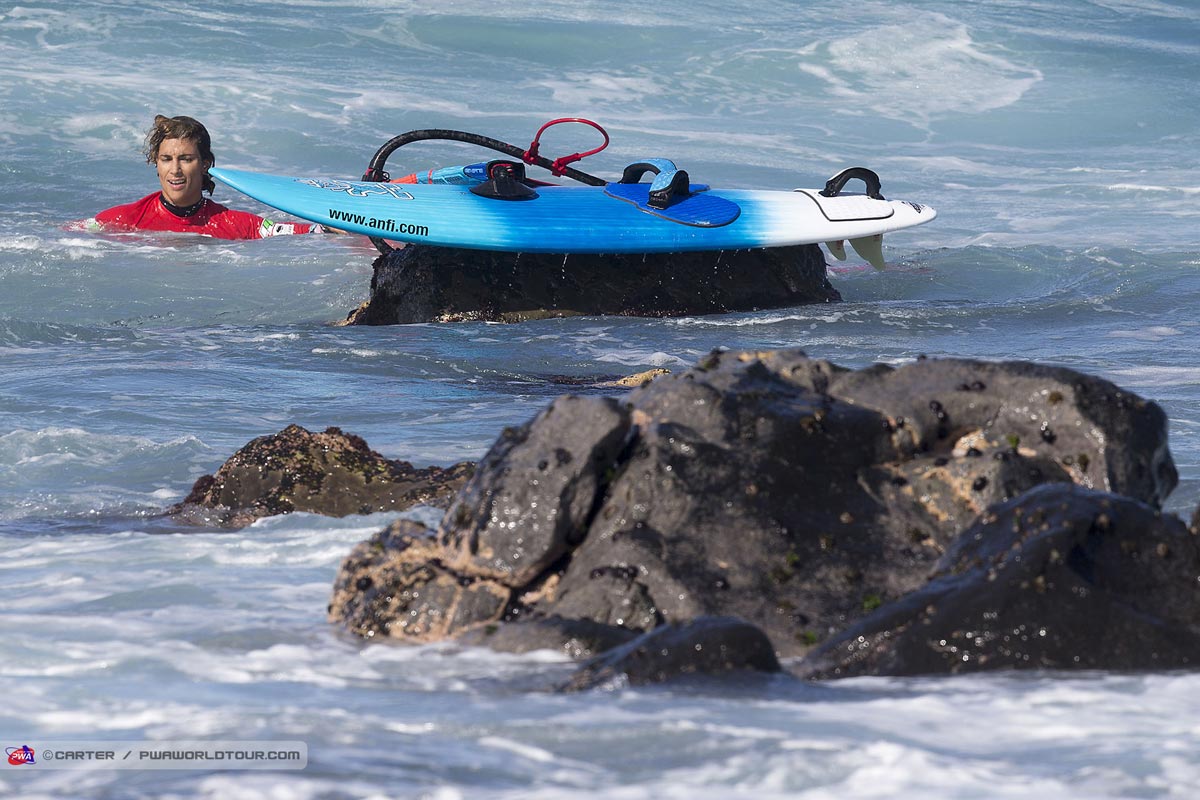 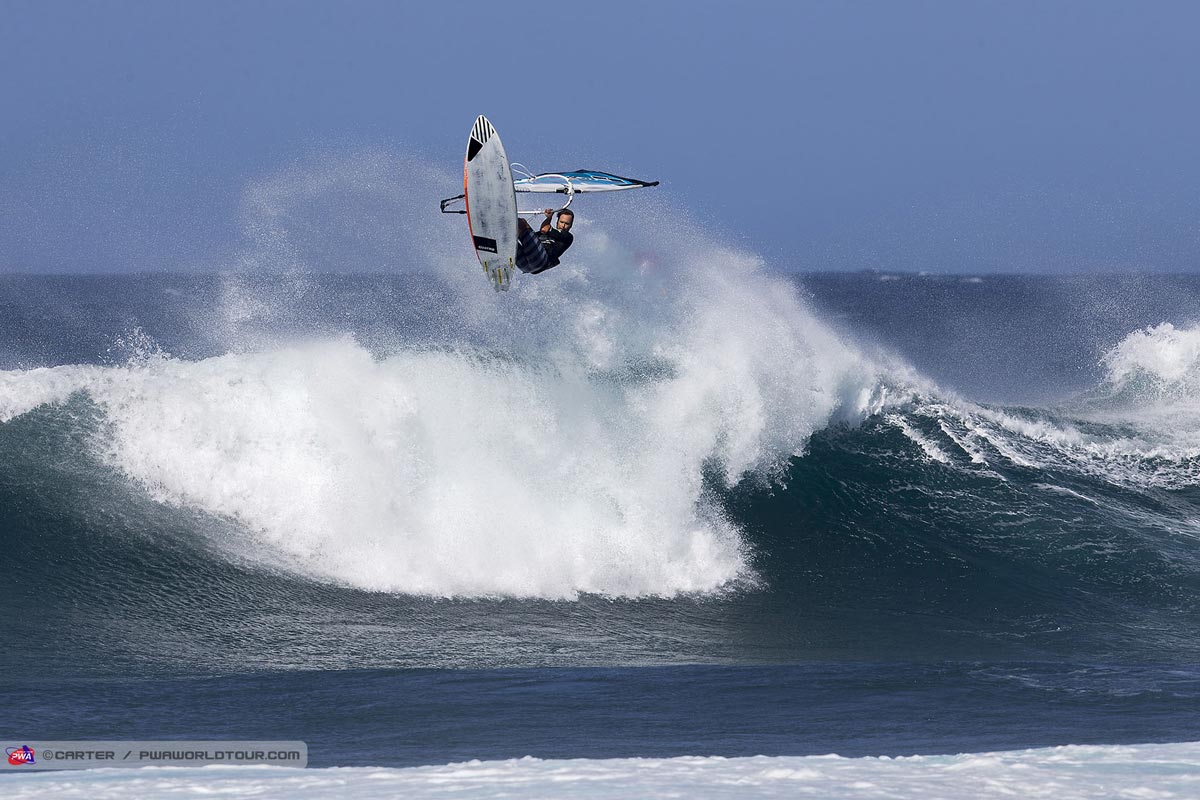 4. A TIGHT BATTLE IN THE OVERALL RANKINGS
For the first time in history the AWT and the PWA saw a mixed final event at Ho’okipa. The best riders of the AWT, the best locals – except Jason Polakow, who isn’t 100% fit after his shoulder injury in February – and almost all PWA riders – some didn’t travel to Maui like Adam Lewis, Alessio Stillrich, Josep Pons Casanovas, Omar Sanchez or Ben Proffitt for instance – were fighting for points.

Everyone of the 48 men riders received points for the PWA ranking and AWT ranking. During the past the PWA had a limited fleet of 32 riders in the wave discipline. But for the Aloha Classic 2015 the PWA changed this rule, what’s in our opinion a bit of a controversial issue as it affects all kind of rankings and distorts the results a bit. It was harder to get a good place in the event as the strong locals and AWT riders took most of the top spots. 8 of the top 15 ranked pro men are locals or AWT riders. PWA riders received less points compared to a pure PWA event and had a hard time to improve their rankings. Same for a few AWT riders, who still were in the game for the title, but lost important points to non regular AWT riders or PWA riders, who were ranked better. Anyway, in total it was great to watch the best 48 riders in the world competing together at Ho’okipa. Perhaps it’s a good concept for the future to open both tours more and decide upon registration numbers if there will be a 32 or 48 riders fleet.

In the end we saw some tight battles in the PWA and AWT rankings. In the PWA men’s category it was a close fight until the end, but to win the overall title, Victor Fernandez had to make the almost impossible possible by winning the 2015 Aloha Classic. With a not ideal start in the single elimination he had to win 12 heats in a row. The former World Champ showed a great performance and advanced through 6 heats, but lost against local Levi Siver. Philip Köster and Victor Fernandez have exactly the same points after 4 events, but Philip takes victory due to the better single event results. In the AWT ranking Camille Juban from Guadeloupe was able to improve his ranking from 3rd place to 1st place overall followed by Boujmaa Guilloul, Kevin Pritchard and Morgan Noireaux.

In the PWA women’s wave fleet Iballa Ruana Moreno takes a clear victory with three podium results but the battle for the second spot in the ladies ranking was quite close. Daida Ruano Moreno finished the NoveNove Aloha Classic in 11th and Sarah-Quita Offringa in 7th. In the end Daida managed to stay 17 points ahead of Sarah-Quita. With a 6th place Sarah-Quita would have pushed Daida down from 2nd to third place.

5. NAYRA ALONSO SURPRISED
Nayra has two kids, stopped her career back in 2013 and impressed everyone with radical wave rides and great wave selection. Place 6 without much preparation! She left a lot of big names behind her. We made an interview with Nayra before the competion: interview with Nayra 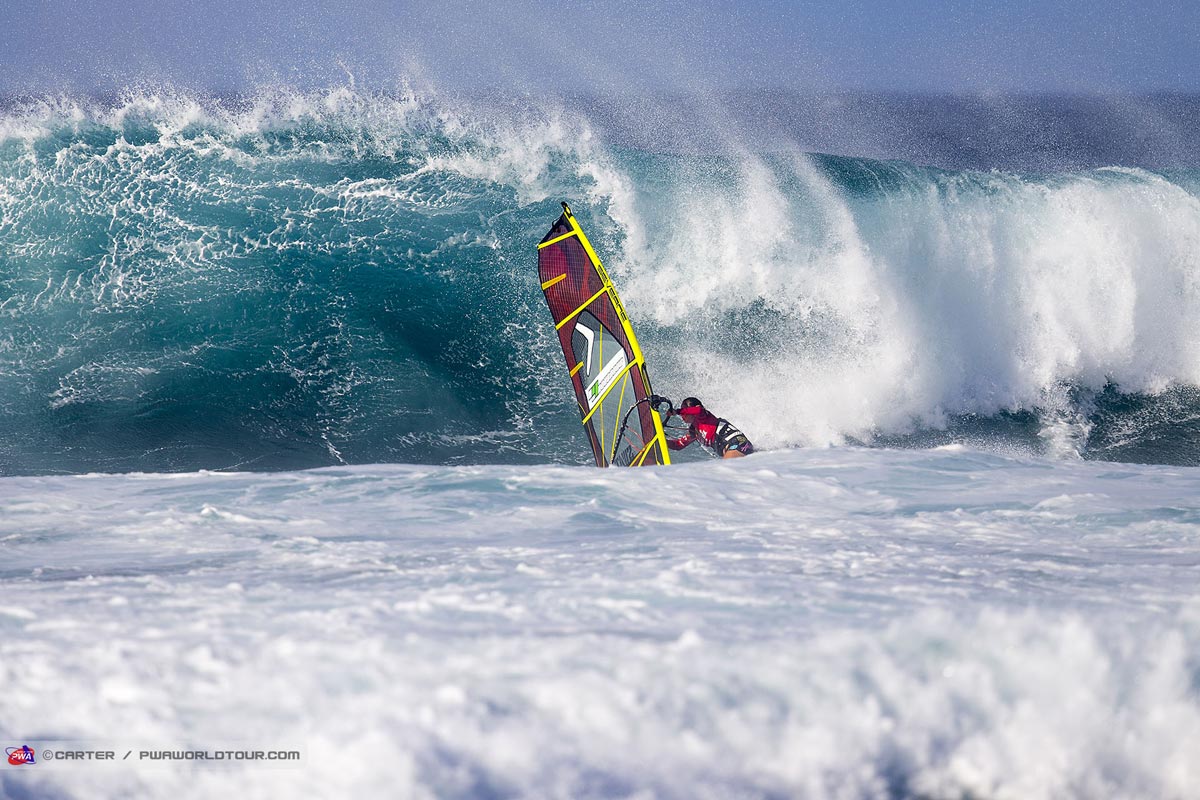 6. CHAMPIONS FOR CHARITY
After the official Aloha Classic event, the “Champions for Charity” super session took place at Ho’okipa. Each of the competing riders paid 100$ entry fee and the winning rider gets the total fund and can donate the money to a charity of their choice. The riders, who impressed most in the 30 minutes long show at Ho’okipa with jumps included, were Marcilio Browne, who landed extremely tweaked Aerials off the lip, double Forwards, Airtakas or Frontside 360s. Josh Stone impressed us as well. He presented an arsenal of moves off the lip like Goiters, Aerials, tweaked Aerials. Bernd Roediger was planing through a Goiter off the lip. Graham Ezzy did his signature one handed Taka but he won last year already. So maybe someone else will win? Vote for your favourite out of 13 riders here!

7. DISCUSSIONS ABOUT RESULTS
The riders are judged by professional judges and several times results are very close decisions. After the final in the ladies double elimination between Iballa Ruano Moreno and Fiona Wylde the emotions ran high. Iballa fought till the end and got big points for her nice last wave ride. Fiona had a very good last wave, too and honestly we as well thought, that she won the heat. We were already looking forward to a second show-down in a super final, but the judges did see it differently and liked Iballa’s style more. Fiona definitely rode the bigger waves and Iballa rode more top to bottom. Some people were wondering as well, why Kevin Pritchard didn’t make it through heat 43A in the double elimination, as he had the best wave selection and made huge aerials in his heat. Jason Polakow: “In my career, sometimes I won heats, although I thought I’d have lost and sometimes I lost, although everybody told me that I was the better sailor, but that’s competition.” Exactly. Don’t worry be happy. 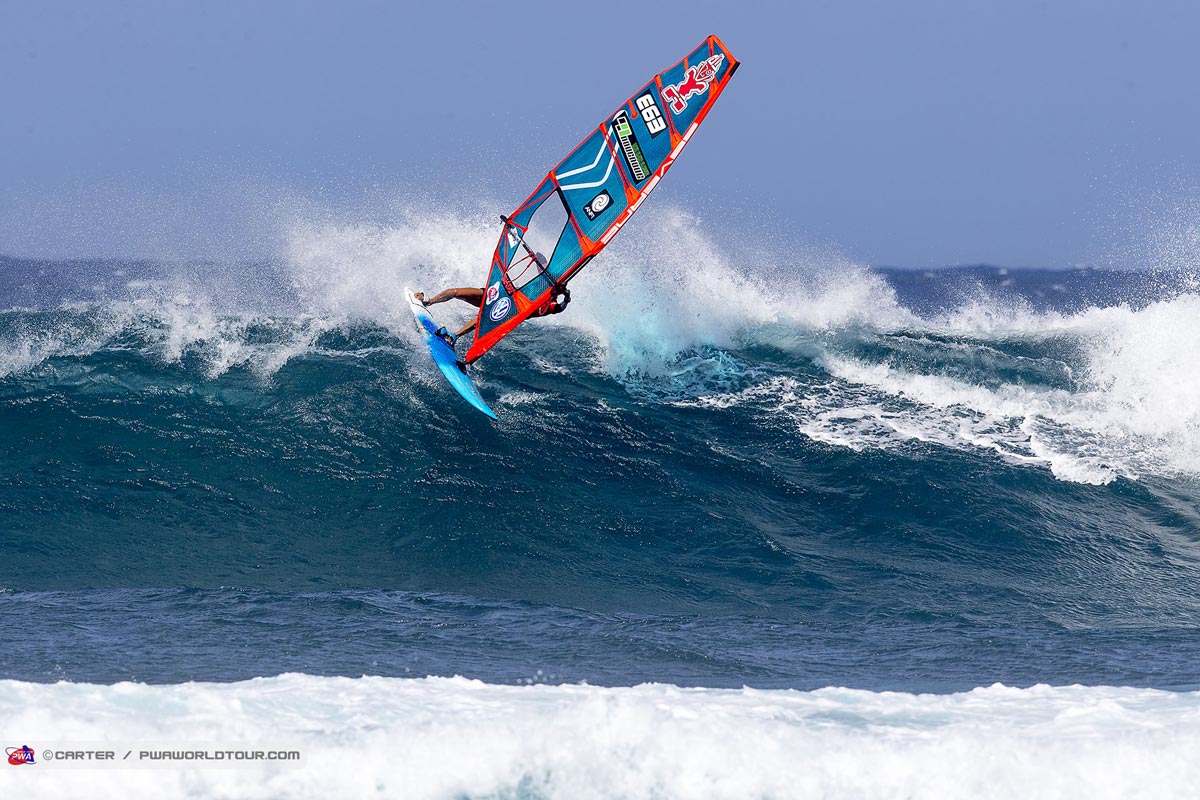 8. LIVING LEGENDS
Some of the living windsurfing legends participated in the event. Robby Naish (US-1111) convinced everyone with his powerful down the line style at the age of 52. He made it in 11th place overall! The other legend definitely is Josh Stone (USA-6), former freestyle world champ in 1999 and 2000. He made it in 13th and still lands the latest shit like rad Goiters or huge tweaked Aerials at the age of 43. A few other well known living legends were participating as well: Kai Katchadourian (US-33), who is 44 years old, ripped the waves, made it into the price money zone and entertained everyone on the live stream or Sean Aiken, who is 47 or Brian Talma from Barbados, the Aloha man. 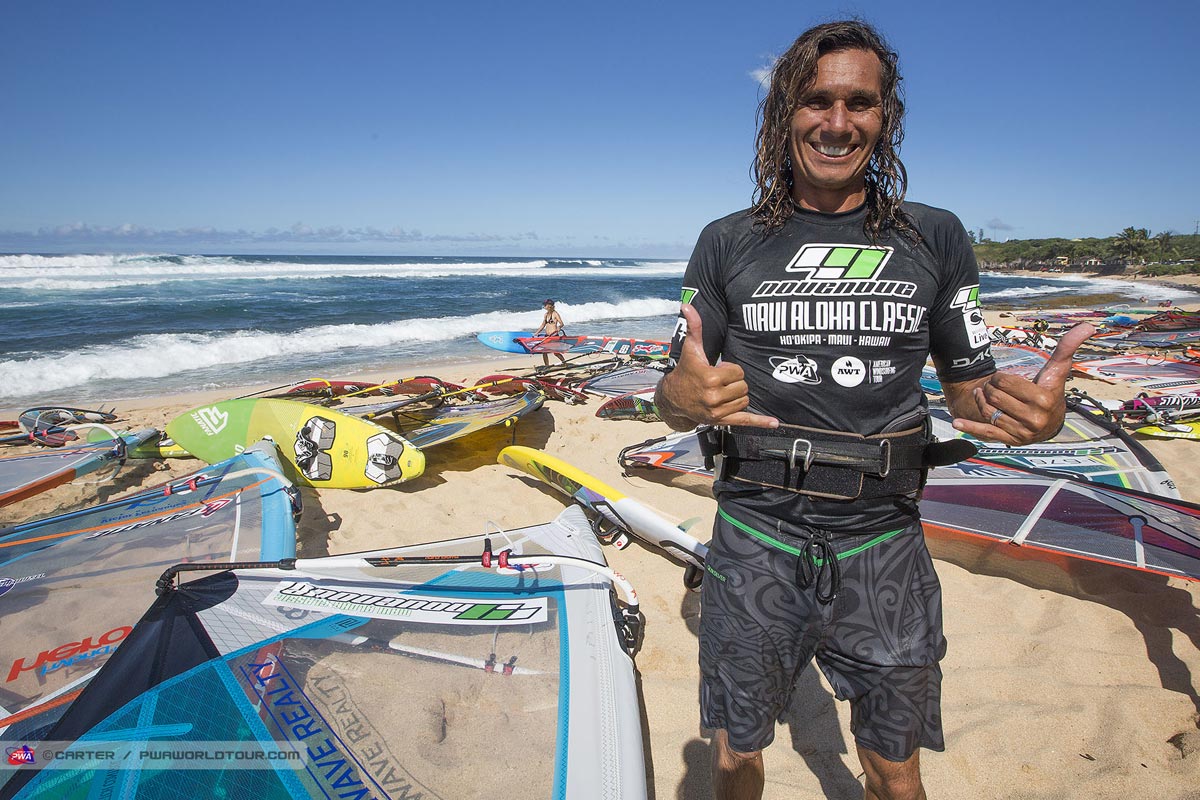 9. YOUTH POWER
Who were the youngest competitors? In the ladies category young ladies are missing. Fiona Wylde is the youngest with her 18 years and was able to finish in second in the main event. In the men’s there is more young blood. Currently the best youth rider at Ho’okipa is 19 year-old Bernd Roediger (US-1113), who made it in 11th. Bernd already got 2nd in the PWA Aloha Classic in 2013. Jake Schettewi is 14 and he is the youngest upcoming ripper and winner of the AWT youth competition. Harley Stone, son of Josh Stone, is two years older than Jake and made it into the main event through the trials, too. Marc Pare from Spain is 17 years-old and sailed for the first time at Ho’okipa. He has a lot of potential and seems to feel comfortable at Ho’okipa. 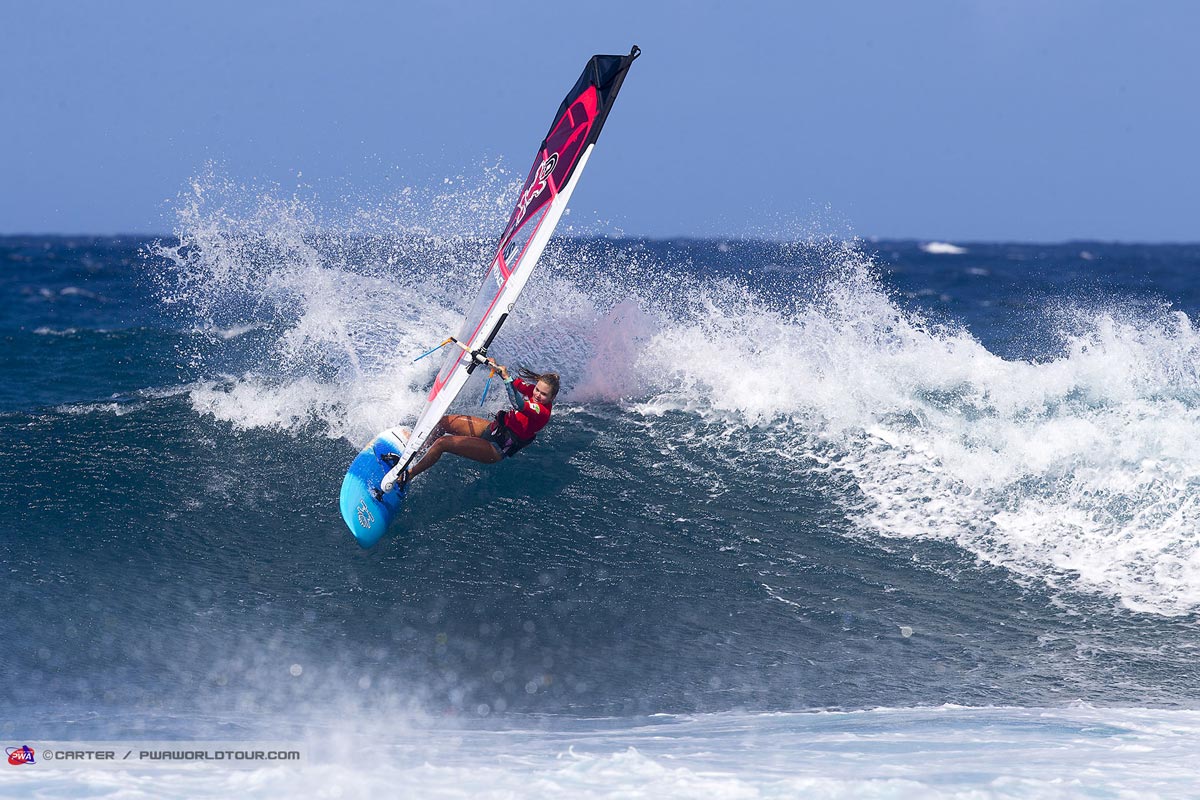 10. JASON POLAKOW, THE COMMENTATOR
As Jason Polakow was not at 100%, after his shoulder surgery in Februry, he did not compete, but joined Kai Katchadourian for some live stream commentary. Kai had the jokes, the freaky mops and mows and Jason had the hard wave riding facts. No question, he is a true expert in terms of wave sailing and has all the specific knowledge about Ho’okipa. No questions didn’t get an adequate answer. 10 points for that commentary team!

It has been an incredible show!! windsurfing deserve a WAVE WORLD TOUR putting together AWT and PWA event with also some contests in Australia, South Africa, Brazil, Irleand, Fiji, Japan as it was in the good old 80’s and 90’s…like the World Tour League!!! We are sick to see 4 contest in nuclear wind on port tack like Canary and North see…we need a more balanced tour to CROWN a REAL WORLD WAVE CHAMPION!!!

Were the judges fans of the PWA riders or just a bit clueless? Wave selection anyone?

Yes please lets permanently go back to a 48 person entry list. Give the locals and the youth a chance. Who wouldn’t like to see Polakow or Seadi rip sometime again? And about the kids, when the older guys retire, who is going to replace them if no one has experience?

ben profitt e jason polakow would be much better !! Ben is so fun, polite and he understands a lot about wave riding as well , sorry kay,

I think the question should be the opposite, are PWA riders allowed to compete on AWT?

I guess the top PWA riders in wave (the top 24 ranked riders) will not be allowed to compete in AWT events except the event takes place in their home country, the freestylers will not be allowed to compete in EFPT events. What I heard they are allowed to competition one EFPT event during the entire season. Boujmaa – he was ranked 24th in the 2014 PWA Wave tour – attended the AWT event at the beginning of the season and then was blocked for the entire PWA season except for the final, where he started as an AWT rider… Read more »

I hope this is a joke. Sort of occupational ban for freestylers. There are nearly no PWA Freestyle Events, but if you participate in other events, then you are not allowed to participate in the unavailable PWA Events??